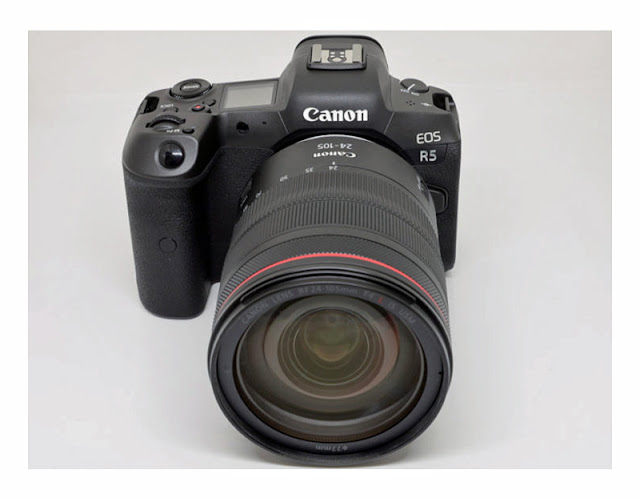 Recently, TechRadar was able to put some questions to David Parry, Canon's Product Marketing Specialist, during a brief chat about the EOS R5. Below is an excerpt of their conversation :


Is the Canon EOS R5 body based on the EOS R?

"What you can see is that it is actually slightly fatter than the EOS R across the top. In my view, it gives it more of a DSLR sort of look to it," David Parry said.

Why is the EOS R's Multi-function bar missing on the EOS R5?

"Because this is a 5-series, more people at that kind of level will expect functions similar to what you get on a 5D." he added.

So is that why this camera is called the EOS R5?

"Which makes sense because in film days we had the EOS 5, then with digital DSLRs we had the 5D, and now we've got the R5 now. So it's all the same sort of level." he added.
And more generally away from the specs, who is the Canon EOS R5 aimed at? What type of photographer will buy it?

"This is going to be a well-rounded product in the sense that it's full-frame, it's got a high frame-rate (20fps and 12fps), it's got amazing video capability with the 8K. So it's going to be an incredibly powerful product," he said.

"But let's not forget there are a lot of enthusiasts out there who love products at this level," he added. "It's not targeted towards any particular genre of photography, in the same way that the 5 series evolved into that all-rounder type of camera. With the 5-series you see it in every single kind of photography situation you can imagine," he added.

The EOS R5 has impressive video credentials. How does it handle heat issues when shooting 8K video?

"We've been doing this for a while now and we've learnt a lot of techniques to dissipate heat on other products that we have in our lineup. For example, being able to move components around, and being able to have them further away from each other," he said.

"And being able to dissipate heat using different materials has been something we've been pretty proud of on other products. This is something we've learnt using both our camera and our video Cinema EOS series with that technology as well," he added.

"So there's a lot of technology that we know is now coming together and giving us the ability to really step up these specifications," he said.

The EOS R5 has Animal Eye AF. Does this work in both video and stills?

"We can't divulge that at the moment, but what's really exciting about that for us is that it's dogs, cats and birds – as far as I'm aware no other manufacturer has mentioned birds in their Animal AF," he said.

"I'm intrigued to see how that works out in the field – because birds are obviously quite different, that's quite a broad spectrum. With dogs and cats, they've got different breeds, but they do look relatively similar, whereas birds can look completely different, from house martins right up to ostriches. That's pretty exciting," he added.

Is animal autofocus based on the same Deep Learning tech that we first saw on the Canon EOS-1DX Mark III?

"We're not divulging anything about where that tech has come from, but again all the learning from other cameras we have do go into the next generation," he said.

"I think the Deep Learning technology is very, very exciting – about being able to get it to recognize people wearing crash helmets and things like that, which has made a big difference to the 1DX."

Does the EOS R5 have full weather-sealing for wildlife photographers?

"We never quote weather-sealing figures, because of the big hole in the front of the camera, but we normally quote another product that has the same level within our lineup," he said.

"I don't know what the weather-sealing capabilities on this product will be, but we are aware that people do use these in pretty harsh environments, so that would be a consideration for us. I couldn't say what those figures are, but it's pretty robust I have to say," he added.

And lastly, the current situation with coronavirus is obviously difficult for a lot of manufacturers. Is the EOS R5 likely to be delayed?

"We're in the same situation as all the other manufacturers in that we're keeping an eye on things and seeing what we can do," he said.

"It's not the same as this, but we've had natural disasters before, so we have a pretty robust system for being able to deal with things like the tsunami and earthquakes. I know this is very, very different, but there's things in place to work on this kind of thing," he added.

"We can't say whether this is going to be affected or not, but let's just wait and see what happens over the next few weeks. This is going to be a really exciting camera for us. It's creating quite a stir and we want people to really enjoy this product, so the sooner we can get it out there the better really," he added.