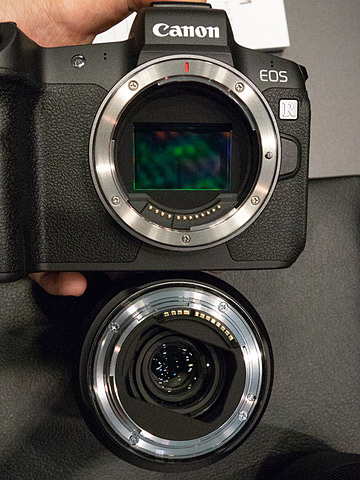 The following article is an excerpt from Canon explaining the larger RF mount on the recently announced EOS-R camera. It is translated into English from Japanese by Google and may not read like an article written in English originally.

I am The Wildlife Ho-tographer, not an optics engineer. The EOS-R is not a camera I will buy for my equipment bag in its present configuration. You can read my post on why I came to this conclusion.

The companies that are new entrants this year appealed were the physical structure of the lens mount. In addition to the short back focal length unique to mirrorless cameras, the word "large aperture" was repeatedly heard. It does not mean that the open F value of the lens is bright, it means that the opening of the mount part is large.

Increasing the opening of the mount is not a zakkori story that "big is a good thing", it is nothing other than having a merit to pursue lens design. In this paper, we will deliver the content of technical briefing sessions that Canon made for stakeholders.

The optical designer reads the lens composition diagram (cross section) and reads how the light passes through the lens, saying that it is "beautiful" not "beautiful."

According to the optical designer of Canon, it is said that the following three points are the main judgment criteria because "it is optically good" in what "beautiful" is said.

Perhaps there are a few who viewed other companies' lens designers as well as Canon in the same way as interview articles in small journals. Anyway, this viewpoint becomes the basis for considering the merit of the large diameter mount.

Let's look at an example that a large aperture mount will help with good lens design. From the previous three points, please keep in mind that "If you bend the light a lot, strong aberrations will occur". 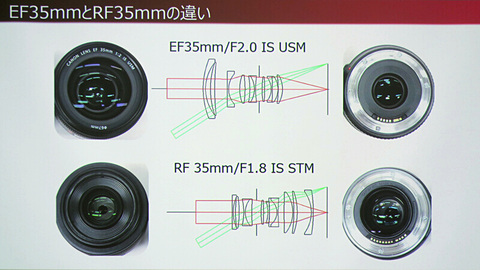 First, set up 3-piece configuration as a reference lens. Instead of having a long back focus, there is no mount opening to disturb the light flux. The vertical bar at the right end of the figure is the imaging surface (film / image sensor) and the left is the subject side.

Below is an image of a case where design was advanced with a small caliber mount. A mount with a small diameter obstructs the light flux, and it is necessary to put the concave lens in the rearmost portion so that the light reaches the periphery of the imaging surface. First, this sudden spreading method generates aberration. And it will be necessary to adjust the lens on the front side to balance.

Then, the number of components increases, the lens barrel becomes longer and longer, and in the first place the lens configuration is not good because of the above reason. It is said that it is in a "vicious cycle".

The image using the large diameter mount is below. If the third lens from the front of the reference lens is lowered to the imaging plane side and the diameter is increased, aberration correction can be corrected straightforwardly.

Many lenses are made up of 10 or more existing products rather than 3, so I think that the actual story is not so simple. Nonetheless, it would be felt that it would be easier to design optically straight lenses if the mounting aperture was adequate. 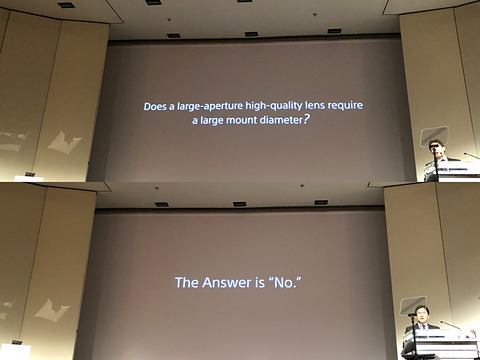 Subsequently, as an example of Canon, it is a configuration diagram of "EF 35 mm F 2 IS USM" for single lens reflex cameras and "RF 35 mm F 1.8 MACRO IS STM" for mirrorless cameras.
In the above EF lens, the lens was placed on the front side with respect to the reference lens. In the lower RF lens, since there is no mirror box, we placed a lens with the same effect at the end. As a result, the RF lens has a shorter overall lens length from the imaging surface.

Initially, Canon also considered to realize a 35 mm full size with the EF-M mount of the APS - C mirrorless "EOS M" series, but satisfactory results were not obtained, such as no performance aimed at . And since the system becomes large when unnecessarily increasing the mount diameter, we actually designed multiple lenses, decided to 54 mm while looking at the balance of optical merit and size, the strength of the camera and so on.

Then the numerical value of 54 mm inside diameter resulted in the same inner diameter as the single lens reflex EF mount, and the designer of the RF mount felt "There was a foresight ahead of 30 years before the birth of EOS".

Oh yeah, it is now Canon that appeals the value of 54 mm like this, but at the product release of "EOS R" we did not announce the concrete numerical values ​​(54 mm inner diameter, 20 mm flange back) on the stage. Before that half a month ago rival Nikon announced the full size mirrorless Z system, it would not be unrelated to the extensive appeal of the numerical value "mount inner diameter 55 mm · flange back 16 mm".

However, the merit of "large aperture mount + short back focus (short flange back)" that two companies appeal is that the degree of freedom of lens design will increase to the last. The idea is basically common.

Also at the press conference of Photokina following the announcement of the two companies, Sony, which is five years ahead of the full size mirrorless market, says, "Do you need a large-diameter mount for large aperture high performance lens?" → "The answer is" No "There is also a scene that rewards one arrow in hot topics.

However, in this context, Sony refuted because it was pre-introduction to introduce the high-end super telephoto lens "FE 400 mm F 2.8 GM OSS" that Sony α Mirror less will sport coverage of sports! And it seems not to be able to receive simply. However, when I heard this, the inner circle was excited that in the 21st century again "sparks falling down" may be seen.

So at the end we got off to some extent from the topic of Canon, but like this, the full size mirrorless market in 2018 was an opportunity to remember that it was hot and humorous.