Canon EOS-3D Camera or Joke Of The Day 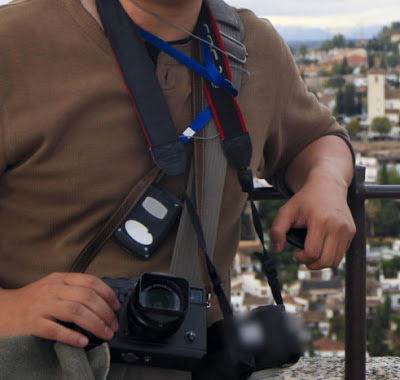 There is a photo going around the Internet this morning asking could this be the long rumored Canon EOS-3D camera? The 'reasoning' behind this is the Canon strap purportedly showing the letters EOS-3D, albeit partially obstructed. And the source is a Chinese forum called Weibo.

I find this rather fatuous and someone must be trying to jazz up a dull Monday morning by passing this story around as a silly joke and now it has taken on some legs. Would Canon bother to make a strap for the EOS-3D when they have not even decided to introduce the camera? Look at the guy in this photo. Does he look like a photographer who has signed a NDA with Canon to allow him to experiment with the EOS-3D prototype camera? Get ready for Canon to announce the EOS-70D camera in a few weeks. This is the next big story and you can read my latest post on this topic.