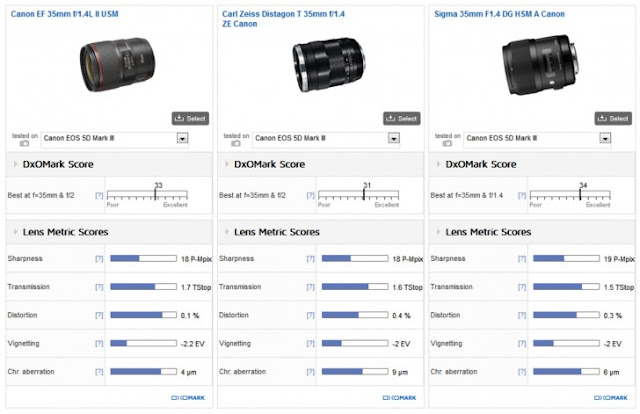 
DigitalRev and DxOMark have reviewed the Canon EF 35mm f/1.4L II lens equipped with the Blue Spectrum Refractive Optical technology. DigitalRev likes the lens more than DxOMark. The latter seem to think the Sigma 35mm f/1.4 Art lens scores better than the Canon in sharpness but in other categories, the Canon performs quite well against both the Sigma and Zeiss 35mm f/1.4 Distagon.

"With the introduction of high-resolution bodies such as the Canon EOS 5Ds and 5DsR, with their ability to highlight lens flaws, it comes as little surprise to see Canon roll out new versions of some of the older models in their line-up. The original 35mm f/1.4 wasn’t a bad performer, but it was beginning to show its age. The new model greatly surpasses the original in several key areas. It is generally sharper, but it’s the improvement in geometry and uniformity that really impresses. Not only does it have low field curvature and astigmatism, but Canon has also dramatically lowered lateral chromatic aberration, with the overall effect of greatly improving imaging performance in the outer field (where the older model was weak)."


My readers know I pay little attention to laboratory analysis and tests. I judge a piece of equipment by how well it performs out in the field repeatedly. Still on my Polar Bear Photo Tour. Click here to see Polar bear photos from my previous trips. You can follow my travels on Facebook , Twitter and Instagram and see my works on MichaelDanielHo.com. I will be providing updates on the tour as time and condition permit. WiFi signals are weak and sporadic.

Check out Canon's newest lens equipped with Blue Spectrum Refractive Optical technology. This new innovation will come with almost every new 'L' lens in the future.