Apple iPhone 8 vs Samsung Galaxy S8 - Who Is Ahead? 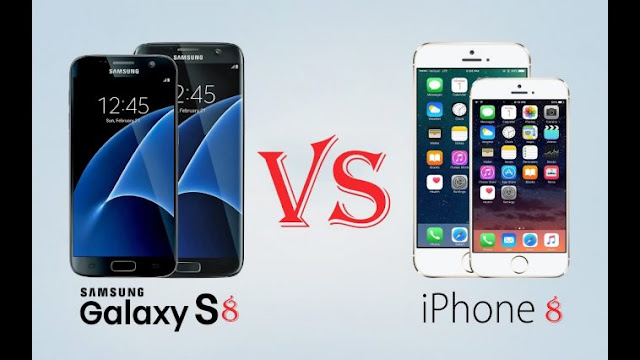 Apple's iPhone 8 is rumored to be powered by the new A11 processor and M11 motion-coprocessor. How does that compare to the Qualcomm Snapdragon 835 or Samsung Exynos 8895 processor in the Galaxy S8?

TSMC is reportedly making Apple’s 10-nanometer chipset. Production is rumored to start this spring. The new chipset Apple and may boast a 20% speed gain and 40% power reduction compared to the older 16-nanometer technology.

Both phones are expected to be evenly matched when it comes to RAM - 4GB each. The iPhone 8 is expected to have more internal RAM (256GB) but the S8, with its built-in 64GB RAM can match and even exceed the iPhone 8, once external memory is included because it can support up to a 256GB mini SD card.

Both Apple iPhone 8 and Samsung S8 models will have a 8MP front camera but the S8 has autofocus. The rear camera will have a 12MP resolution but the iPhone 8 is rumored to have the 12MP dual lens. Apple is planning to take the crown in the area of smartphone photography.

The iPhone 8 is expected to have an iris scanner, fingerprint reader and wireless charging but the S8, with its own iris scanner, plans to take biometrics to an even higher level.

With the acquisition of Viv Labs and the original creators of Siri under Samsung's umbrella, the S8's will come with the new AI Digital Assistant, Bixby.

Bixby will soon be introudced into all of Samsung's HDTVs, watches, tablets, etc. It is Samsung’s answer to Siri, Google Assistant and Amazon’s Alexa.

Who will have the Lead?

With the debacle of the Galaxy Note 7 in the rear view mirror, Samsung is determined to reverse its fortune with the S8 and S8 Plus. With its impressive phone shipping this month, they will have an approximate 6 months lead ahead of Apple.

The Apple iPhone 8's announcement may be delayed due to challenges around its 3-D sensing technology, difficulties with embedding the fingerprint reader on the front of the phone and shortage of OLED screens but still in time for the all important Christmas holidays. In the meantime, Apple is relying on the iPhone 7S and iPhone 7S Plus to keep customers from switching to Samsung.

Samsung is salivating about converting some of the current Apple iPhone 7 users to their new phone. When the iPhone 8 debuts some time in Q4, Samsung will already have the new Galaxy Note 8 (debut August 23) to challenge Apple again.


Some observers say with the advent of ever smarter phones and their built-in cameras, they may even threaten the survival of point-n-shoot and DSLR cameras. Take a look at the video above to see some of the best smartphone cameras on the market now. Read my earlier post on this thought.


Apple iPhone 8 vs Samsung Galaxy S8 - Which One Should I Buy?