I have just returned from my Southern Africa wildlife photo shoot testing the Canon EOS-1D X Mark II camera. You can follow my travels on Twitter and Facebook. Beginning to get back to my daily routine, processing the photos and keeping my readers up to date on the latest photography news.

The recently announced EOS-5D Mark IV was tested by DxOMark and they gave it a very high mark. For those who are into engineering and lab specs, below is the comparison with other Canon models. I am more interested in real world performance and will not be buying this camera since it is essentially a little brother to the EOS-1D X Mark II plus I already own the EOS-5Ds. Below is an excerpt from the DxOMark review. 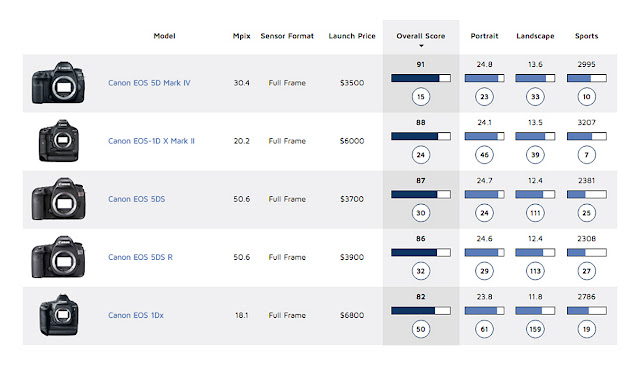 Canon’s iconic EOS 5D series of full-frame DSLRs have had wide appeal with both pro and enthusiast photographers, blending great image quality and good features in a more affordable mid-range body design. Boasting a significant number of upgrades over its predecessor, including increased resolution, an updated autofocus system, Dual Pixel RAW capture, improved metering and 4K-video capture, the latest Mark IV looks like a mouth-watering prospect for the still photographer.

Built around a new 30.4Mp full-frame CMOS sensor, capturing 6720 x 4480 pixel stills in 3:2 aspect ratio, the 5D Mark IV offers a notable increase in resolution over the 22.3Mp 5D Mark III. For many Canon enthusiasts frustrated with the more modest resolution increase between the 5D Mark II and III versions, this will be a very welcome bump in resolution that brings the 5D Mark IV more in line with some of the recent high-resolution Sony and Nikon competition.

The autofocus system from Canon’s flagship EOS 1D X Mark II has filtered down to the 5D Mark IV, which now offers greater focus coverage, with more of its 61 targets located at the top and bottom of the frame. Forty-one of these targets are the more accurate cross-type variety, including 5 dual cross-type targets at f/2.8 and 21 cross-type targets at f/8. This promises snappy AF with all Canon EF lenses and teleconverters, although the number of cross-type and dual cross-type targets will vary depending on the lens used. That’s not the only focusing trick Canon has pulled out with the 5D Mark IV either, which also features a Dual Pixel RAW mode that allows photographers to fine-tune the focus in post-production. By recording two 30.4Mp RAW files, photographers can apply fine focusing tweaks including “image micro adjustment,” “bokeh shift,” and “ghosting reduction” using Canon’s own Digital Photo Professional software, which is supplied with the camera.

The 252-zone / 150,000-pixel RGB+IR metering system is also from the EOS 1D X Mark II and is another notable upgrade compared to the 63-zone system in the 5D Mark III. The frame rate has increased, too, now up to 7fps with AE and AF tracking, and the 5D Mark IV will record JPEGs until the storage is full, or 21 RAW files in a continuous burst. In Live View mode, the frame rate is a little slower at 4.3fps, but the 5D Mark IV now offers full continuous autofocus tracking during burst shooting in Live View. The 3.2-inch LCD screen has been upgraded to a higher-resolution 1.6m-dot version with convenient touchscreen control. The LCD screen remains a fixed unit, however, and so doesn’t offer the pop-out or articulating controls often sought after for shooting video and for composing stills at awkward angles, or in bright light.

For video, the 5D Mark IV records 4K at 24/30fps, Full HD up to 60fps or standard HD at 100/120fps, which will allow quarter-speed slow-motion movies. While higher-resolution video capture is certainly a welcome addition, the 5D Mark IV records 4K in a 1.64x “crop mode,” which means it uses only part of the sensor and affects the focal length of the lens – something photographers looking to switch quickly between film and stills capture may find frustrating.
With feedback from Canon photographers requesting improved dynamic range, as well as some encouraging DxOMark scores from the recent EOS 80D and 1D X Mark II sensors, we were excited to see how the new Canon EOS 5D Mark IV would fare in the lab. Read on as we round up the analyzed and verified scores in our full review.