A Look At The Camera Industry In 2016 and Beyond

I am still on my Japan Wildlife Photo Tour. Spent about 2 weeks in Central and Northern Japan photography Snow Monkeys, Red-crowned Cranes, Steller Sea Eagles, etc. Now I am down in the south western part of Honshu to do some travel photography. You can follow my travels on Facebook and Twitter. See my equipment bag and works on MichaelDanielHo.com

It is no secret camera manufactures have not been doing well in the last few years. Nikon recently announced a big loss and layoffs. Medium Format companies are especially endangered.

Lenvid recently released their 2009 to 2016 infographic chart showing camera and lens sales figures. The drop in point-n-shoot and DSLR cameras and lenses is still continuing. The silver lining in these disappointing sales figures for the last few years indicate the share of DSLRs has increased at the expense of compact cameras. Mirrorless cameras did the best and is taking a bigger share of the total photography pie.

Compact cameras are predicted to lose ground again in 2017, primarily due to advancement and popularity of smartphone cameras. Mirrorless and DSLR cameras may have seen its nadir and make a comeback this year.

Generally I am in agreement with most of the findings and prediction except I expect Canon will come out of the pact much stronger. In past years, I have argued Canon has under priced its higher end models (EOS-1Ds and EOS-5Ds) and put too many features into the lower end bodies like the EOS-XXDs and EOS-6D.

This encourages many serious and even some pro photographers to buy the EOS-5D models instead of the EOS-1D. The EOS-1Ds Mark III sold for $8000 in 2008 and the EOS-5D Mark III's price was $3,500 in 2012. The latter is clearly a better camera in many ways. Loading up a camera with more features and capabilities and selling it for less may be great for consumers but hard on the bottom line for a camera manufacturer.

The entire camera industry is racing to the bottom by putting more and more goodies in their lower end models and selling them for less. Unfortunately, smartphone manufacturers have the economies of scale and technology to match and beat the camera manufacturers in this game.

Take a page from luxury car manufacturers. They all have entry level, medium and high end models. But in order to get some of the more advanced features, the buyers must buy the high end models or pay extra on lower end cars. That's how the car companies increase their profit margins and lure customers to trade up to more and more prestigious marques. 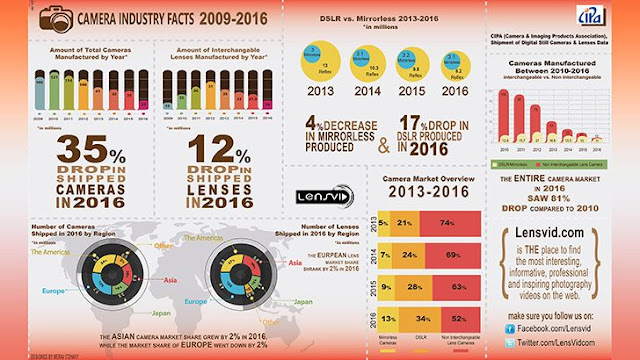 LensVid has come to the following conclusion after analyzing the data for the last few years :