My readers know Canon recently surpassed the 120th million copy of EF lens production. For a preview of what is coming from Canon for the remainder of 2017 and beyond, read my earlier post.

The following is an excerpt from the DP Review's interview :

The Utsunomiya plant is where all Canon's L series, cinema, and broadcast lenses are produced. It's also where all Canon lenses are designed. Many of those designs can be attributed to the three men pictured above. In fact just before we started the interview Mr Izuki informed us that he had been lead designer of the EF 35mm F2 IS lens we'd chosen to document the factory tour. So there's also a pretty good chance you have one of them to thank for your favorite Canon glass!

Please note that this interview was conducted through an interpreter, and has been edited slightly for clarity and flow.

What percentage of L lenses are manufactured in the Utsunomiya lens plant?

Because this is the 'mother' factory, 100% of L lenses are made here.

How many different lenses can be manufactured simultaneously in this plant?

Basically, we create all lenses every day [including L-series EF, Cinema EOS and broadcast]. The only exception is some of the broadcast lenses.

Which lenses in particular are the most difficult to manufacture and why?

Any large super telephoto lenses because of the size of the glass elements. In terms of skill required for lens assembly: the TV broadcast lenses are most difficult.

How many lenses are produced at this lens plant every year, both in terms of types of lenses and total units?

We do not disclose total production for this plant. That said, Canon has produced a total of 120 million lenses over the years. Of course, many of those are kit lenses, which are not produced here, but in our facility in Taiwan.

Tell us a little bit about the history of the plant.

The facility as a whole has been here for forty years, however prior to 2005, we were located in an older building on the other side of the property. And the land where the current plant sits was initially owned by the Du Pont family. When they returned it to the prefecture, we bought it.

The current lens facility opened in 2005. When we moved in we completely revamped our lens-making machines and devices. Not all, but the majority. This helped to push [us] to a higher standard of quality.

Over the past 40 years, lenses have changed a lot, with autofocus introduced, aspherics, etc., what was the largest paradigm shift in lens technology?

We are reaching the 30th anniversary of the introduction of the EOS line. It was at that time, in 1987, that we moved into autofocus. When we did that, I believe we were the first ones to go fully-electronic mount autofocus. Because the motors were built into the lens we had a significant competitive edge.

As DSLR resolution increases, it can be a challenge to achieve precise focus because AF errors are more noticeable. How do you reduce this risk in the manufacturing and quality control process?

Overall precision is something customers are increasingly requiring. In this factory, we have increased the level of precision of our machines so that lenses have more accurate autofocus.

A lens going through QC testing. Information from the test will be saved on a chip in the lens.
During the tour it was mentioned that Canon lenses now store their quality control test data using on-board memory. Can that data be used to improve autofocus reliability?

We do store data from final lens testing on each unit. I won’t be able to speak in greater detail other than saying, yes, in theory, that data could be used to achieve higher autofocus performance [better AF precision] with a DSLR. 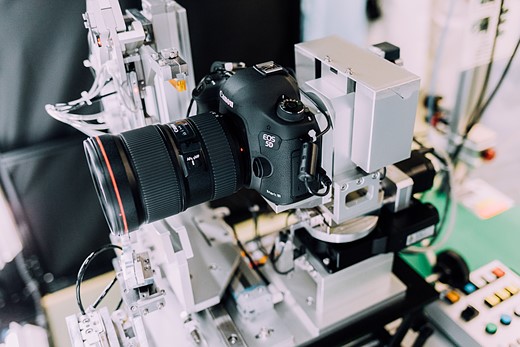 How long does it take a lens like the Canon EF 16-35mm f/2.8L III USM to make its way from start to finish in the assembly line?

From raw material being polished, to the final tested product being boxed: about 24 hours of work, in theory. But the physical production would actually take longer. This is because we are producing parts in batches and there are machines that need to be fitted. These variables aside, if you take the actual time of labor, assembly and packaging, it is about 24 hours.

You mentioned you were looking to hit an 80% automation rate in this facility. What kind of efficiency gain does that represent?

It’s difficult to say in terms of time, but I can say it use to take about 70 people to make a lens like that prior to automation, now we need about 6 or 7.

In one sense yes. But it’s not about firing the rest of these people, it’s about allowing them the time to build up their skills. This way they can face challenges and difficulties like increasing precision and performance. So we’ve essentially been able to allocate these workers to a different environment.

A lens in the final assembly process. It can take 25-30 years to become an Assembly Meister at Canon's Utsunomiya plant.

Typically how long does someone train before they attain the title of 'Meister'?

Now that the process for assembly, element polishing and quality control is so automated, we're curious how many lenses pass QC the first time vs those that have to go back for re-calibration.

In terms of maintaining a level of quality before going into mass production, we do a lot of checking and scenario building [using a super computer] to make sure everything will go right. Once a lens goes into mass production we can safely say that we have seen no lenses returned for further calibration.

What impact did the 2011 have on this facility and how long did it take to recover?

A lot of the ceilings came down. We took a big hit in that regard. But, we were able to come back into operation within about 2 to 3 months.

While not the most exciting photo, if you look very carefully, you might see some minor impressions on the linoleum. This is (subtle) evidence of the 2011 earthquake, which caused some ceilings to collapse. The yellow tape line is used by computerized robots in the factory.
Did you implement any changes as a result of the earthquake?

We have fortified the building, so that it is more earthquake-proof. And the assembly tools we use are put together in such as way that they are shake-proof.

Are there major differences in how you QC test broadcast and cinema lenses vs EF lenses?

The concept for testing is basically the same. But, in terms of broadcast/cinema lenses there are some unique customizations that we offer depending on the particular cameraman or filmmaker. If they want to zoom by hand, for instance, we can accommodate the pressure of the mechanism to their requirements.

A lot of your users use EF lenses for video creation. Has that changed the way you design some EF lenses?

In terms of stills shooter, when it comes to autofocus, the faster the better. On the other hand, videographers tend to require a variance in autofocus speed. Sometimes they want a slow effect. So we had to create a motor that could actually do both fast and slow focus. This is why we introduced Nano-USM. It's in both the 18-135mm F3.5-5.6 IS USM and the 70-300mm F4-5.6 IS II USM.

Will that kind of autofocus be used more in the future as video becomes more of a requirement for users?

At any given time, how many new lenses are in development at this facility?

I can not give you a number, unfortunately. But I can say that new lenses are in development as we speak. So I hope you look forward to them.

Let me begin by saying how grateful I was to be given access to Canon's lens factory and what an honor and privilege it was to sit down and interview the creators of some of Canon's most legendary glass. In my six and a half years writing about photography, this was one of my most memorable and rewarding experiences.

As you might expect, there were nearly endless points of fascination. Some of which are covered in this interview, others in our factory tour slideshow. Something that particularly interested me is the fact that all the information from a lens' final calibration and quality control check is saved on a chip within the lens itself. The idea here is this information can been used, in theory, when a lens comes back in for cleaning or recalibration. It also means that at some point, perhaps camera bodies will be able to access this information, which could lead to better AF precision. This is solid forward thinking on Canon's part.

I was also intrigued to find that Canon manufactures every L lens in the same factory. Not only that but every current lens in the L series is being made every day. As you might imagine, security at the facility is very tight.

And I'm not ordinarily one to be starstruck, but when Mr. Izuki told me he designed the Canon EF 35mm F2 IS, my jaw dropped a little. There's nothing quite like standing of front of the creator of one of your favorite lenses. Speaking of favorites, we also asked Mr. Hayakawa, Mr Okada and Mr Izuki which Canon lens they've designed/worked on over the years they are most proud of. We got some great answers. We'll be posting those in a separate article soon, so stay tuned!