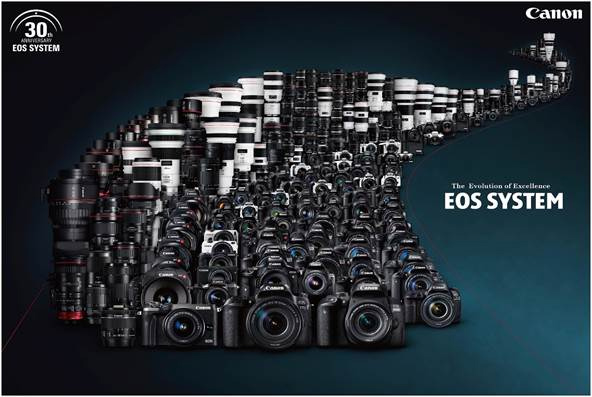 My readers know I am The Wildlife Ho-tographer and have used Canon equipment for over a quarter of a century. Throughout the years, I have embarked on many worldwide photo tours testing numerous pieces of Canon equipment. I recently came back from a Wildlife Photo Tour of Japan with the EOS-1D X Mark II camera. You can follow my travels on Facebook and Twitter. See my equipment bag and works on MichaelDanielHo.com

This year, Canon is celebrating the 30th anniversary of the launch of its Electro Optical System (EOS), which includes EOS-series interchangeable-lens cameras and a diverse range of system accessories. The system debuted in March 1987 with the launch of the EOS 650 SLR camera and EF lenses, making EOS cameras the World’s first to incorporate an electronic mount system, representing a new generation of auto focus SLR cameras.

EOS is an acronym of “Electro Optical System” and is also fittingly the name of the Greek goddess of dawn. A total of 98 EOS models have been produced since 1987 (35 film cameras and 63 digital).
Currently, the EOS system, including the Cinema EOS system, comprises 24 models with a selection of 97 EF lenses.

To mark this milestone, Canon is displaying a range of cameras and lenses from the EOS archive on its stand at The Photography Show, including the EOS 650 and the EF 1200mm f/5.6L USM, the world’s longest focal length and largest aperture lens. Visit Canon on stand D141/E131 at The Photography Show from 18th – 21st March at the NEC in Birmingham.

For what to expect from Canon for the remainder of 2017 and beyond, read my earlier post.