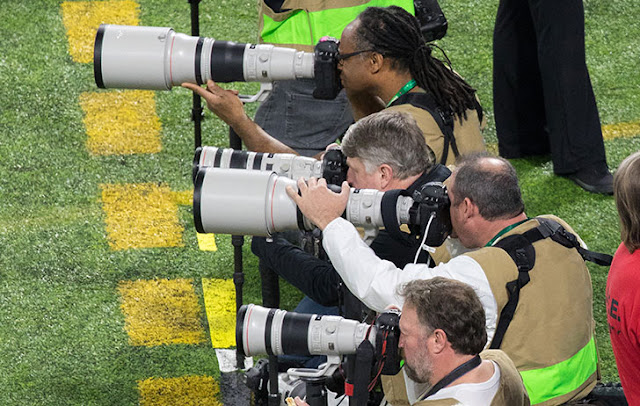 No secret here, really. Canon sales are head and shoulder over the rest of the pack and their Super Telephoto lens and cameras once again dominated at this year's Super Bowl game. They just had a good 2017 and poised to do even better in the years ahead, leading to the finale of the Summer Olympics in 2020 in Tokyo, Japan.


MELVILLE, N.Y., February 6, 2018 – In 2017, Canon U.S.A., a leader in digital imaging, was the number one selling Full-Frame Interchangeable Lens Camera (ILC)1 brand and APS-C ILC2 brand in the U.S., according to The NPD Group. Canon has been number one worldwide in these camera segments for the last 14 years, based on a global Canon survey3. February 4thshowed that 2018 is off to a great start for Canon, as top sports photographers from across the country gathered in Minnesota to cover the big game between the teams from Philadelphia and New England. An estimated 80 percent4 of the photographers in the stadium used Canon EOS DSLR cameras and EF lenses, and Canon’s iconic white lenses filled the sidelines from the opening kickoff to the final whistle. In addition to the photographers on the sidelines, Canon’s line of HD broadcast lenses were also used extensively to help deliver the game to nearly 110 million television viewers.

“Canon understands there are many equipment options for photographers and we are honored to be the primary choice for both the pros capturing the nail-biting moments of the big game and for people capturing the important moments of their lives,” said Yuichi Ishizuka, president and COO, Canon U.S.A., Inc. “As an industry leader, we also recognize the important role that service and support plays in keeping our customers satisfied, whether at our award-winning service centers throughout the country or on-site at major global events.”

A full complement of friendly and knowledgeable staff from the Canon Professional Services (CPS) team, a fixture at major sporting events throughout the year, were on site at the stadium for most of the week leading up to game day providing comprehensive equipment maintenance, extensive equipment loans and expert technical support to the major photo agencies and individual professional (or media) photographers covering the game.

For veteran sports photographer and Canon Explorer of Light Peter Read Miller, this was his 40th time covering the big game as a professional, and he was well stocked with Canon cameras and lenses.

“CPS has been a great support to me throughout the years, especially at a game like this where I get real time technical and equipment support. They’ve been instrumental in my success over the years.”,” said Miller. “40 years of shooting the big game is an amazing experience. Photographers are just as competitive as the athletes, and it’s great to know that I can count on Canon equipment and support to help me get the winning shot.”

In 2018, CPS will be proudly attending to professional photographers at over 22 locations, including major sporting, auto racing, Hollywood and political events.