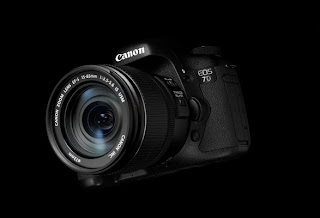 As I reported earlier in my Blog post, Canon has finally made the announcement on the Firmware upgrade to the EOS-7D camera. Below is the official release from Canon USA.


LAKE SUCCESS, N.Y., June 28, 2012 – Canon U.S.A., Inc., a leader in digital imaging solutions, announced a firmware update for the EOS 7D Digital SLR camera that adds new functionality to improve its performance for serious photographers and semi-professional users. The update, free to all EOS 7D owners, gives the camera more advanced shooting options, including an increase in the maximum number of burst images taken in the RAW file format (from 15[i] frames to 25[ii] frames) as well as the ability to process RAW image files directly in the camera and the option to set a maximum ISO setting in ISO Auto mode. The firmware also adds the ability to adjust up to 64 audio levels manually prior to recording video, supports custom file naming, and allows for compatibility with Canon’s newly introduced, optional GPS Receiver GP-E2.

“By introducing this firmware we want our customers to know that we are always looking to enhance the user experience for all of our current products in the marketplace,” said Yuichi Ishizuka, executive vice president and general manager, Imaging Technologies & Communications Group, Canon U.S.A. “The latest firmware for the EOS 7D Digital SLR enhances the capabilities of the camera and brings new possibilities to its users, making it a more valuable tool for their craft.”

Enhancing the Imaging and Audio Capabilities

For budding action photographers who use the EOS 7D as their camera of choice, being able to capture the perfect shot comes down to a matter of milliseconds. The EOS 7D is capable of taking photos at a high-speed burst rate of up to 8 frames per second (fps). With the firmware installed the camera captures up to 25 consecutive frames when shooting in RAW and up to 17[iii] consecutive frames when taking RAW+JPEG images.

Once the firmware is installed the EOS 7D will also be able to process RAW images directly in the camera, allowing dynamic adjustment of exposure compensation, white balance, picture style, noise reduction at high ISO speeds, distortion correction, and other processing parameters. For mobile photographers, this ability to adjust RAW images quickly and re-save them as JPEG files can be a huge time-saver as opposed to downloading files to a computer and making adjustments later. The camera will also be able to re-size JPEG image files in-camera. These features will be accessible through the Quick Control functions which will be accessible while the camera is in playback mode. When viewing images on the camera, image files can also be given a star ranking for easy sorting during post processing. The firmware will also enable faster scrolling of images when displayed in a magnified view on the camera’s LCD screen.

The new firmware enables photographers to have more control over the maximum ISO speed when the camera is in ISO Auto mode by setting a maximum ISO range. In certain low-light scenarios, such as during a sunset, where light changes each minute, photographers can lose the brilliance and color if the ISO setting is too high. Now, photographers can ensure their ISO setting will remain within specific parameters allowing them to concentrate on the moment, knowing that they will achieve the desired photographic results. The firmware also adjusts the available ISO Auto range, previously 100-3200 and now ISO 100-6400.

In addition to these enhancements, the new EOS 7D firmware enables manual adjustment of audio levels prior to recording video, similar to the functionality found on the EOS 5D Mark II. Videographers can now manually adjust up to 64 audio levels on the EOS 7D so that they can refine the captured audio to match their particular needs.

Similar to the new EOS 5D Mark III, a new submenu provided with the EOS 7D firmware update enables photographers to modify the first four characters of file names, in the camera. This valuable feature makes it easier to use the EOS 7D camera in multi-camera shooting situations by providing a way to identify the files coming from a particular camera without opening each image individually.

The new firmware adds full compatibility for the EOS 7D with Canon’s GPS Receiver GP-E2. This GPS Receiver can be mounted to the camera’s accessory shoe or clipped to a belt and tethered via a USB cable. The GP-E2 was created to serve outdoor photographers; it records shooting locations including latitude, longitude and altitude, as well as camera direction. The camera’s internal clock can now synced through the GPS unit using UTC (Coordinated Universal Time), the primary standard by which time is regulated, for accurate time recording or syncing clocks on multiple cameras. A GPS Logging function can display the photographer’s route on a map, using supplied software.

The new firmware upgrade for the EOS 7D Digital SLR camera will be available in early August at no charge. Visit and bookmark my website MichaelDanielHo.com and click on the tab Equipment to get the link to download the new Firmware in early August. You can also see many Travel and Wildlife photos taken around thew world with the Canon EOS-7D camera. In my opinion, this is the best DSLR camera value in the market today.