Some of you may know I am also a Travel photographer, in addition to my love of wildlife photography.  I travel to Europe frequently and the United Kingdom is one of my favorite European countries to visit.  I am an Anglophile and have a particular interest in photographing castles, cathedrals and stately homes all over Europe. This weekend is the big Jubilee celebration for all of Great Britain to commemorate Queen Elizabeth II's ascension to the throne 60 years ago.  The 2012 Summer Olympic games will be held in London in July. This is a great time for anyone who wants to visit Britain to see and experience some of her fascinating history, heritage and culture - This royal throne of kings, this sceptred isle, this earth of majesty, this seat of Mars.


The current monarchy can be loosely traced back about 1,000 years after the Norman conquest in 1066. Feudalism began with the Normans and lasted till about the 15th century. During this period, the English nation and the language was formed and molded. Frequent internecine conflicts for power between kings and powerful lords brought many wars, bloodshed and suffering to many. The decline of feudalism and the rise of the wool trade eventually made Britain a super power.


After the disastrous War of the Roses ended, the Tudor dynasty was ushered in and it lasted from 1485 to 1603. It was a turning point in English history. England became one of the leading European powers. The two famous rulers of the House of Tudor were Henry VIII and Elizabeth I. The Elizabethan age produced one of the world's greatest playwrights, William Shakespeare.

The first 40 years of the 17th century can be characterized as a period of growing conflict between the King and parliament, representing the rise of the middle class. The conflict led to the civil war in the 1640 which resulted in the abolition of the monarchy and in Oliver and Richard Cromwell's military rule from 1653 to 1660. This period ended in the Glorious Revolution which marked the end of the English bourgeoise revolution.


During the period between 1688 to 1760, England led all other nations in Europe on commerce and created the conditions necessary for the establishment of an empire and paved the way for the industrial revolution.

During the Industrial Revolution (1760 - 1850) Britain became the first industrial power and "the workshop of the world." The Anglo-French rivalry for world domination, which started in earlier centuries, continued and culminated in the Napoleonic Wars (1803 - 1815) and Britain was victorious again.
The Victorian era started in 1837, named after Queen Victoria, was a period in which Britain grew to become the world's super power. Her unchallenged sea power also provided the United Kingdom with the platform to become the world's greatest colonial power as well, leading to the phrase, " the sun never sets on the British Empire." 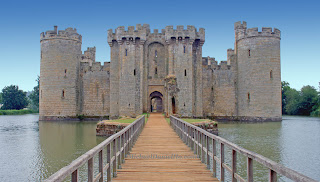 The 20th century is a period of the decline for Britain as a world power. Mired in two world wars, from which Britain emerged as a victor, but greatly weakened. It is characterised by the disintegration of Britain's colonial empire and the effort to adjust Britain to the new reality of joining the other developed countries of western Europe in the European Union. Although Great Britain's stature as a major power has slipped, she has bestowed upon the world one of the most lasting legacy - the English language, recognized as the Lingua Franca for international communication and commerce. The English language is estimated to be spoken and understood by about 2 billion people in the world.


Visit my website MichaelDanielHo.com to see the equipment I use for Travel Photography and click on the Europe link to see many more beautiful Travel photos from Great Britain and many other European countries.