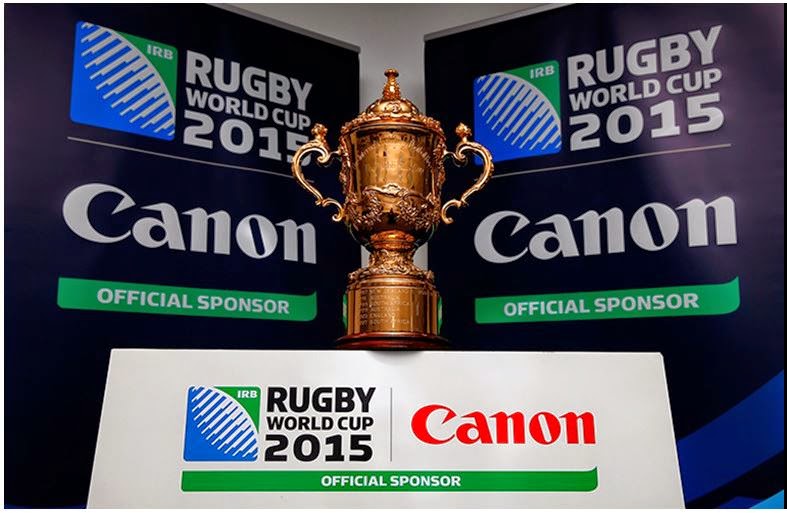 
Rugby World Cup Limited (RWCL) has announced that Canon, a world-leader in imaging solutions, has joined the family of Rugby World Cup 2015 official sponsors. The deal represents the first time that Canon has partnered with rugby’s showcase event, underscoring the strength and appeal of the Rugby World Cup brand in the global sponsorship marketplace.

RWCL Chairman Bernard Lapasset said: “We are delighted to be welcoming Canon to the Rugby World Cup family as an official sponsor for the first time. This exciting deal with a global leader in imaging further underscores the prestige of the Rugby World Cup brand in the global marketplace as we look forward to what promises to be a very special and record-breaking England 2015 tournament.”

James Leipnik, Chief of Communication, Canon Europe, Middle East and Africa, said: “We are thrilled to extend our long history of involvement in the world’s best sporting events by supporting the Rugby World Cup for the first time. Images play a vital role in bringing the emotions and action of global sports to fans that are not able to experience the events in person.”

Leipnik added: “Our participation presents us with exciting opportunities to support professional photographers and fans with our imaging expertise, as they capture and share world class rugby moments throughout the tournament.”

During Rugby World Cup 2015, Canon will be undertaking a range of activities as an official sponsor, including providing print and copying solutions used by the tournament organizers.

Canon will also be working with Rugby World Cup Limited to deliver a range of image-related initiatives to enhance the spectator experience during the tournament. The Canon Professional Services (CPS) team will be on-site sharing their imaging expertise and helping professional photographers to get the perfect shot throughout the tournament. The dedicated team of CPS technicians at Rugby World Cup 2015 will provide accredited professional photographers with advice, essential maintenance services, equipment loans and help with minor equipment repairs.

The Rugby World Cup 2015 will be hosted in England between 18 September and 31 October 2015 and will be a celebration of rugby and its unique character-building values, exciting and inspiring the nation and the world to play and support the game. England Rugby 2015 is the organizing committee for Rugby World Cup 2015 and will deliver the six-week tournament, hosted in 10 English cities and in Cardiff, Wales. 13 match venues will play host to the 48 games that will celebrate and engage more than two million spectators, including more than 400,000 international travelling fans.