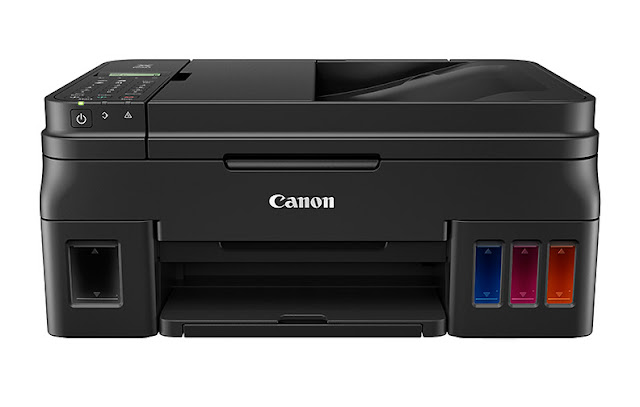 Each of the PIXMA G-series MegaTank printers feature a front-facing, built-in refillable ink tank system that makes it easy for users to monitor ink levels and refill when needed. Paired with the ink bottle’s spill-resistant tops, the system is designed to provide seamless and clean usability at home and in the office. This new hybrid integrated system of replenishing ink is cost-effective and offers higher page yield than the prior generation of PIXMA printers. The black ink provides up to 6,000 pages per bottle and the total color ink combination provides up to 7,000 pages2. The PIXMA G-series printers’ easy-to-use refillable ink bottles offer substantial ink capacity with 135 ml in the black bottle and 70 ml in each color ink bottle. Another value-added feature for the new PIXMA G-series printers is the initial quick installation set-up timeframe (for ink installation only) which is approximately six minutes.

"Our PIXMA G-series printer models offer smart design inside and out,” said Yuichi Ishizuka, president and COO, Canon U.S.A., Inc. “Expanding the line of PIXMA printers with the added benefit of a built-in refillable ink tank system highlights Canon’s commitment to continuing to enhance the printing experience in businesses and in the home with genuine Canon print reliability.”

One of the key features of the PIXMA G-series MegaTank printers is their overall size and ability to save space. Rather than having bulky side-mounted refillable tanks, all of the printers feature an integrated front-facing refillable ink tank system, allowing users to check ink levels and to refill as needed. Furthermore, the PIXMA G2200 MegaTank All-In-One Printer provides users with the option to print and scan while the PIXMA G3200 and PIXMA G4200 printers have similar functionality, with the PIXMA G4200 model offering an LCD screen and fax option, making it even easier for users to get the most out of their printing experience. The PIXMA G4200 printer also features an automatic document feeder to easily copy and scan multiple documents without having to load them one page at a time.

Utilizing new pigment and dye hybrid inks, the PIXMA G-series printers provide crisp and pronounced black text and vibrant colors for visually impactful printing. Each of the G-series models offers print speeds of up to 8.8 images per minute (ipm) in B/W and 5.0 ipm in color and can produce a borderless 4 x 6-inch photo in approximately 60 seconds. In addition, the printers offer a maximum color resolution of 4800 x 1200 dpi.

With Wi-Fi1 capabilities, both the PIXMA G4200 and G3200 Wireless MegaTank All-In-One Printers can help users increase their productivity by allowing users to print from almost anywhere. By simply using a smartphone and the Canon PRINT app, users can easily access PIXMA Cloud Link to print photos and documents from popular online social platforms and services, such as Instagram, Facebook, Twitter, Flickr, Photobucket, Dropbox, Evernote, Google Drive and Microsoft OneDrive, as well as from Canon Creative Park. The PIXMA G4200 and G3200 printers also support Google Cloud Print, for printing from Gmail and Google Docs on a compatible mobile device, and from the Google Chrome browser for Mac, Windows, Linux and Chrome computers.