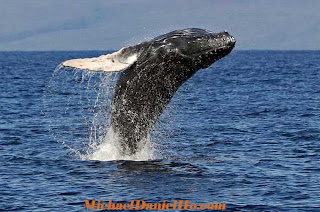 The magnificent Humpback whale is a favorite animal for whale watchers and is renowned for its impressive breaching displays and for the mysterious 'songs' of solitary males. Humpback females are slightly larger than the males. Their robust bodies are blue-black in color, with pale or white undersides. The flippers may also be white and are the largest appendage of any animal; reaching up to fifteen feet in length. On the underside of the mouth are 12 to 36 throat grooves, which can expand when filtering water during feeding.

Humpback whales have characteristically knobbly heads, covered in many raised lumps (tubercles) and barnacles. There are two blowholes on the back and the spout of water can appear very bushy. The spreading tail flukes have a distinct indentation in the middle; as the whale undertakes a deep dive it usually arches its back (hence the common name) so that the tail flukes are raised above the water and clearly visible. The pattern on the underside of the flukes is unique and can be used to photo-identify and track individuals. 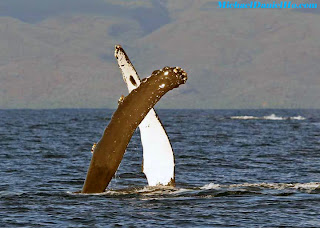 Male humpback whales compete for females directly by escorting receptive mates and aggressively defending them, their famous 'song' is also thought to be a form of courtship. Solitary males sing highly complex songs that are similar within a population but evolve over successive seasons. Calves are born after a 10 to 12 month gestation period, they accompany their mother on the return migration to polar feeding grounds, and studies have shown that individuals return to the same feeding ground consistently year after year. Possibly one of the best-known aspects of humpback whale behavior is their acrobatic aerial display; the most spectacular of which is breaching, when the body of the whale may completely leave the water, returning with an enormous splash. 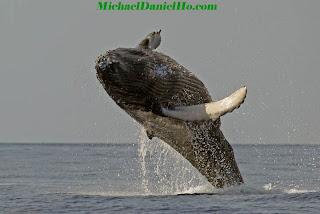 Humpback whales received full protection in 1966 and have since captured the public's imagination. However, a few countries have actually asked for exemptions from the International Whaling Commission to hunt Humpbacks and other great whales for 'scientific' research purposes. These are nothing more than thinly veiled atttempts to restart a small scale commercial whaling operation. Whale watching tours to see Humpback whales are very popular throughout the world. From countries like Australia, the South Pacific nations and Japan to states like Alaska, Hawaii and both coasts of the United States, people are flocking to join whale watching tours and experience the wonderful world of the Humpbacks. 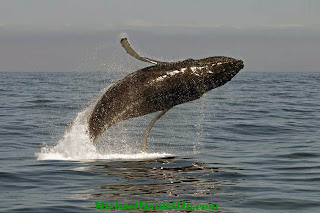 Scientists from around the world, especially on both coasts of the US, Alaska and Hawaii are providing valuable photo identification of individual Humpbacks that has helped to uncover some of the mysteries surrounding their impressive migration. Humpback whales are the most studied of the large whales but little is still known about some aspects of their behavior and about population dynamics, further research and monitoring is therefore needed to safeguard these awe-inspiring acrobats of the sea. Visit my website MichaelDanielHo.com to see many more exciting Humpback and other great whale photos taken around the world.