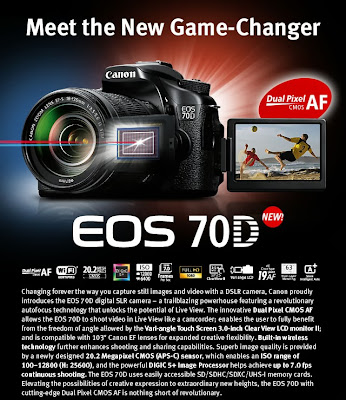 The following is an excerpt from DxOMark's testing of the Canon EOS-70D camera :

We have had the opportunity to compare the video AF performance in the lab of Canon’s innovative EOS 70D model with the Sony SLT-A77. Read on to find out how of these two hugely capable cameras performed. While not the first Canon camera to feature an image sensor with dedicated phase detection pixels for continuous AF tracking and improved AF response during video and Live View (that was the short-lived EOS 650D / Rebel T4i with the Hybrid CMOS AF also found on the EOS M), the EOS 70D is unique in that on-sensor phase detect AF is available on every pixel and adopted for initial subject acquisition and for fine-tuning focus.

Phase detection on sensor means there’s no need to additionally implement the slower reacting contrast detection AF system found on most rivals (and the earlier Canon models). According to Canon, Dual Pixel CMOS AF is possible over a much larger area than previous systems, up to an area 80-percent of the image frame. If you’ve read our reviews previously, however, you’ll be aware that the AF system is not evaluated with our usual DxOMark protocols. However, one of the main benefits to this new sensor design has been the successful melding of image capture and subject detection for auto-focusing without sacrificing image quality. It is, potentially, a game-changer for the DSLR, for the time being allowing the conventional phase-detection based AF module to remain in the base of the mirror box under the reflex mirror, which is used for AF with the firm’s range of EF and EF-S lenses.

In the future, it may allow some freedom for Canon’s camera designers, perhaps even allowing a return to interchangeable viewfinders in top-of the-range bodies. Then perhaps these models could offer the option of an electronic viewfinder for video or an optical viewfinder for stills. Either way, the new dual pixel CMOS AF system in the EOS 70D is an exciting development, and we thought we would compare the AF capabilities against one of its most able rivals, the Sony SLT-A77.

This camera retains the separate, dedicated phase detection autofocus module like a conventional DSLR, thanks to the adoption of a fixed semi-silvered “Translucent” mirror. Instead of redirecting light to a secondary mirror underneath the main mirror and then onto the dedicated AF module, the new mirror reflects some of the light upwards into the AF module, in the area usually occupied by the prism.
This meant Sony could replace the optical viewfinder with an electronic version while the faster phase detection autofocus system could be employed full-time for stills and video and during live-view, while offering the DSLR-like handling and responsiveness that users had been accustomed to. There are other benefits to the fixed mirror as well, such as ultra-fast continuous shooting in stills but also improved subject tracking performance during live view and video. As with the Canon, the Sony does not use contrast detection AF.

The Canon EOS 70D is an attractive proposition for both stills photographers and video users. The new Dual Pixel CMOS AF cleverly solves the problem of the redundant viewfinder based phase detection AF system when recording video and neatly avoids the patented trans-missive mirror solution adopted by Sony.
As well as retaining an optical viewfinder, the Dual Pixel CMOS AF sensor with its total of 40 million pixels used for image capture shows a small but palpable increase in lowlight performance and higher levels of sharpness than previous APS-C cameras from the firm.

We observed only a marginal improvement in DR over earlier offerings, and while perhaps not the best in class this may or may not be that significant, depending on the type of photography practiced. For video enthusiasts, this camera is one of the best choices available on the market currently and at least is a viable option to the entirely likeable and very capable Sony SLT models. For comparison between Canon EOS-70D vs Sony SLT A77 video performance, visit here.