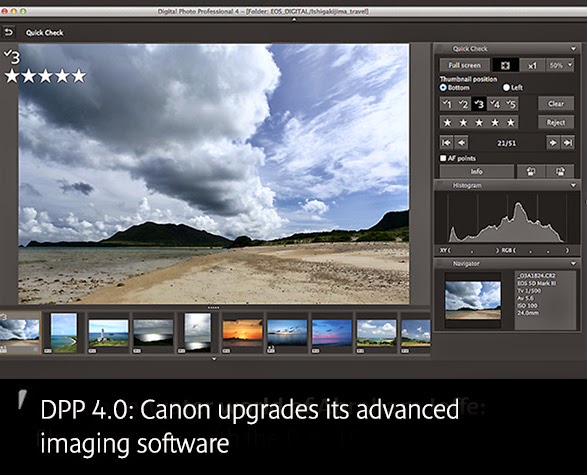 Canon has launched Digital Photo Professional (DPP) 4.0, the first sweeping overhaul of Canon’s RAW processing software since its launch. The latest version of DPP - available for download at the end of June - has been updated with a raft of key changes to satisfy the most demanding of digital photographers. For those who can't wait, you can download the software now from Canon's Australia website.

Canon software engineers – having the unique advantage of being able to directly harness the power of the Canon sensors, DIGIC processors and lenses – have made the all-new Digital Photo Professional 4.0 a much faster, more dynamic, linear and feature-packed image editing software solution, thanks to the ability to fully utilise 64-bit architecture. The latest version of DPP has been designed and developed from the ground up, tailored to the workflows of professional and high-end amateurs to help them realise the key EOS System concepts of speed, ease of use and high image quality.

New, improved Canon algorithms have been optimised to make the most of the wealth of information delivered by the camera sensors, while productivity has been increased thanks to improved speed of RAW image display and developing that makes real-time image adjustment a reality.


The all-new Digital Photo Professional has been re-engineered to give the most discerning photographers a far more comprehensive set of tools and functionalities to get the most from their images.

A new colour adjustment palette allows hue, saturation and luminance adjustment for eight individual colour gamuts, enabling the user to adjust one specific colour in isolation without affecting the image as a whole. This is particularly useful when adjusting background tones in portraits, where there might previously have been a risk of giving a colour cast to skin tones, for example.
enlarge image

The all-new DPP 4.0 features faster real-time processing and offers a secondary image window, which can be used as a magnifier for detailed inspection of chosen areas of an image.

Canon software developers have re-engineered the processing algorithms to increase the freedom in tonal rendering. By adjusting highlights, it is now possible to reproduce tones such as those in clouds and peoples’ faces that would previously have appeared washed out.

For those photographers with dual monitors, DPP 4.0 allows a secondary monitor to be used as the preview window on the primary display. While the main monitor can be used to perform delicate adjustments, a secondary image window for images can be used as a magnifier for closer inspection of part of an image.

With the launch of DDP 4.0 comes an updated EOS Utility 3 and the two pieces of software now offer better integration. The introduction of EOS Utility 3 makes it is possible to trigger the camera direct from the DPP tool palette as well as access to all the rest of the EOS Utility remote shooting functions without the need to start a separate application, thus enabling a more streamlined and integrated workflow.

At launch, DPP 4.0 is compatible with Canon’s current range of full-frame DSLRs, including the EOS-1D X, EOS-1D C, EOS 5D Mark III and EOS 6D. For other models, an update of DPP 3.14 will be released.