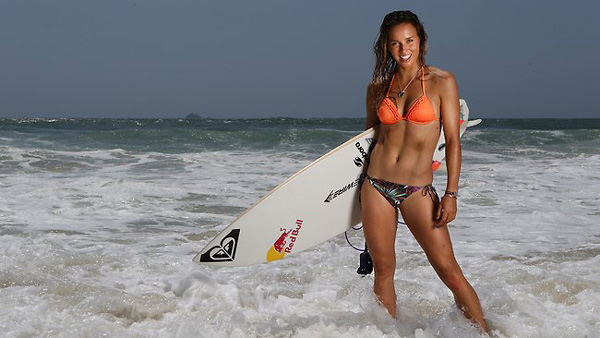 Sydney, Australia, 16 February 2016 – Canon Australia is delighted to announce the appointment of Australian surfing World Champion and Managing Director of Fitzgibbons International, Sally Fitzgibbons, as an official brand ambassador. To kick off this new role, Sally and Canon are launching the Canon Dream Squad - a mentorship-based competition that will inspire young Australians to turn their passion into a career.

Now open and available for submissions, the Canon Dream Squad will enable one lucky Australian to learn the ropes of business strategy, content creation and social media from some of the most talented and inspirational creatives and entrepreneurs from the start-up and imaging sectors.

“To be successful in today’s world, young Australians need courage, creativity and the ability to collaborate with people from all backgrounds who can inspire them, no matter what they want to achieve from life. My dream to be a world-class athlete, a philanthropist and an entrepreneur came as the result of a lot of hard work and support from all those around me. That’s why I’m thrilled to launch the Canon Dream Squad, which gives me the opportunity to support and encourage another young Australian and help them fulfill their passion,” said Sally.

According to Sally, digital and social media give young people unrivaled opportunity to quickly establish and nurture their business to passionate fans and customers through authentic and meaningful content.

“Imagery is really important to my business because it captures my unique view of the world and connects the people who are important to me - friends, fans and consumers of my products,” says Sally. “Today, almost 50% of consumers access social media each day and this brings them closer to my world with content that inspires and resonates, which is fundamental to the success of my business.”

The Canon Dream Squad competition is open for submissions from 16th February until 11:59 pm (AEST) on 31st May 2016. A Canon panel will select three finalists who will then meet Sally and the Fitzgibbons International team where the final winner will be chosen. The eventual winner will then join Sally and the Canon Dream Squad team for a series of workshops and masterclasses from 30th June, 2016, for what will be a once in a lifetime opportunity.

“During judging, I won’t be looking for the highest-quality production or a video with all the trimmings. Instead, I will be looking for a young person who has a vision and passion for their business idea and a hunger to grow, learn and back themselves no matter what,” says Sally.

According to Jason McLean, Director – Consumer Imaging, Canon Australia, “Sally is an incredible young Australian who has turned her passion of living a healthy and happy life into a flourishing career. She credits a lot of her achievements to the support of the people around her and the different tools she uses. Canon is proud to be working with Sally as an ambassador and to enable her to share her experiences and passion with her young audience, often through creative content and stunning imagery.”

“My role as an ambassador with Canon is unique in that I’m not often behind the lens of a camera. Instead, I’m a professional content creator who uses imagery to engage, collaborate and connect with people looking for inspiration on how to live healthy and happy lives,” says Sally.

“To live your passion and be successful you have to embrace the belief that no one sees it like you and be confident in yourself. I’m excited to show others how photography can be the enabler of their passions and careers, no matter the dream,” Sally concludes.

To get involved, follow the conversation at #squadgoals and #canonaustralia and visit the Canon Dream Squad at www.canon.com.au/dreamsquad.

How to enter Canon Dream Academy :

Upload your video to YouTube or Vimeo and link to this video supplied in the entry form via www.canon.com.au/dreamsquad

The winner of Canon Dream Squad will spend time with Canon Masters including videographer, Abraham Joffe and surf photographer, Eugene Tan, as well as shadow Sally’s team at Fitzgibbons International and learn from Canon Australia’s Marketing & Sales as well as Sun Studios teams. This will consist of a series of workshops and masterclasses across a 6 month period. The winner will also receive a trip for two to the Target Maui Pro surfing competition in November or December 2016 to capture Sally in action and put their new skills to the test.

Three Canon Dream Squad finalists will receive Canon equipment including an EOS-70D camera, accessories including a tripod, microphone and SD cards, as well as a 12 month Adobe Creative cloud subscription ($49.95 per month) to help kick start their content creation journey.