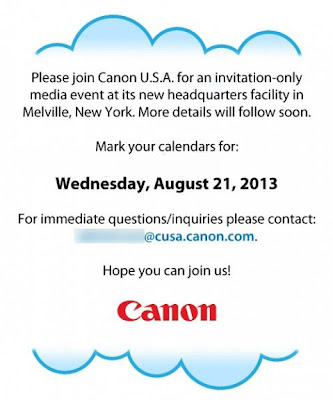 Canon USA has scheduled a media event in its new headquarters in New York. Is this just a big celebration of their new HQ or will Canon make use of the attention an introduce some new products?

My guess is, most probably. The EOS-M camera line is waiting for an upgrade but since this line is not selling well outside Asia, Canon may not want to use this event to highlight their less than stellar camera line. The long awaited, megapixel EOS-1 camera is a remote possibility but most likely it will be announced later this year, with a delivery date in 2014. The Canon EOS-70D has been announced but will not be shipping until late September, although Canon is looking to speed up their delivery schedule.

This leaves the Canon EOS-7D Mk II camera. Canon may not want to 'upstage' the EOS-70D before it has a chance to reach the camera stores, but a teaser announcement of the 7D replacement cannot be ruled out. Personally, I am very eager to get my hands on the Mk II version of the EOS-7D. It should be another winner, just like the current model. Read the latest post on this topic.