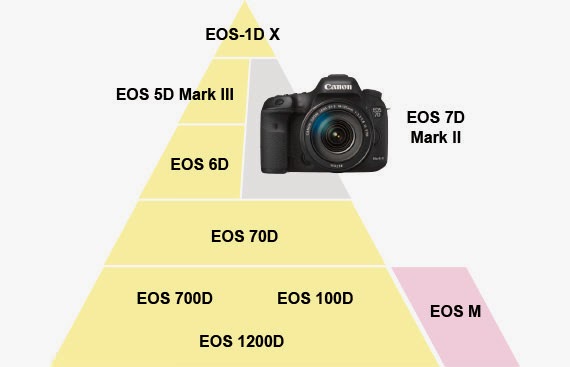 Canon announced the long awaited EOS-7D Mk II camera on September 15 with a list price of $1,799. As you can see from the pyramid above, the new camera is lumped into the section with the EOS-5D Mk III and EOS-6D. Both cameras will be getting an upgrade next year. The current list price of the 5D and 6D bodies are $3,399 and $1,899 respectively.

Last year, I wrote a post commenting on how Canon is pricing their higher end cameras too low by putting too many advanced features on them. Now that the EOS-7D Mk II has been introduced at a price point so close to the EOS-6D, there will be room for the Mk II version to be priced above $2,000 next year. The two cameras are fundamentally different and appeal to separate segments of photographers. To me, the EOS-6D is Canon's way of luring anyone who is interested in getting into full frame photography at a very low price. I doubt they are making much money on this model. My philosophy on photographic equipment has always been to go for value and not low price.

I define value as the best combination of performance, quality and price while a low price is usually achieved by providing the bare minimum quality and features. The next EOS-6D Mk II may go upmarket but still be priced comfortably below the EOS-5D Mk IV by about $1,500.

Sagacious observation on Canon. Their camera sales have been down for a few years now even though the prices have been kept steady. Lowering prices consistently for an item like a higher end camera is rarely a winning formula. Do not be afraid to charge for quality and features.