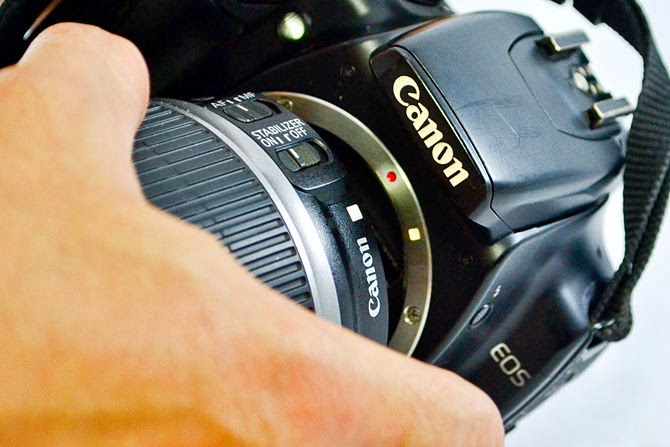 You just removed a Canon lens equipped with Image Stabilization from the camera and mounted another one. But as you start using the combo, you hear a slight rattling sound coming from inside the lens. You give it a gentle shake and sure enough, something is loose inside. It happened to me with the EF 500mm f/4L IS II Super Telephoto lens out in the field. Is there something wrong with the lens? Should I stop using the lens and call Canon’s Service department? Not necessarily! Let Canon Digital Learning Center explains why.

Canon Image Stabilized lenses perform their “magic” by having a group of lens elements that are held together and can be very precisely moved up, down, left or right. With most (but not all) IS lenses, a device called a “coil” (not a coil spring!) holds these elements and responds almost instantly with these tightly-controlled movements to commands from the IS detection sensors and circuits in the lens. It’s this ability to move these lens elements — in direct response to any detected camera movement — that allows the optical image stabilization within a Canon IS lens.

When IS is not active in the lens, these correction elements need to be held in a centered position, to allow best optical quality when shake-correction is not needed. Normally, when you use IS, it’s activated along with the camera’s light meter when you press the shutter button half-way down and a few seconds after you remove your finger from the shutter button, you’ll often hear a soft “click” coming from the lens, as the IS system locks the moveable elements in the coil in a centered position. You can think of this as a “parked” state for these moving correction elements.

During typical operation, when the camera’s meter system turns off, the IS system is signaled by the camera to lock and center the correction elements and using power from the camera, the IS system performs this task. If you were to remove the lens at this point, you’d hear no noises from the IS correction elements because they’re physically locked in that centered, “parked” position.
So why is there sometimes a rattling sound?

If you were to physically remove a lens from the camera body immediately after you shoot a picture, with the IS still active, the correction elements are still in a free state and ready to move in any direction as commanded by the IS detection system. But as you twist the lens to remove it from the lens mount, power from the camera suddenly stops.

If this happens, the IS correction optics have not been locked and centered and are loosely contained by the coil which holds them. They can and will bump into surrounding mechanisms within the lens barrel if you, for instance, were to move or shake the lens deliberately — and this is exactly the rattling you hear.

Nothing is wrong with the lens and under normal circumstances, this won’t damage anything (obviously, it’s not the recommended state to store the lens in long-term!). All that’s happened is that IS did not get the chance to turn itself off normally and, thus, the correction group of elements are not physically locked in their normal, centered position. Don’t panic if you hear this soft rattling sound in the lens; it’s easy to correct.

Correcting the rattling sound in an IS lens

All that’s needed is to re-mount the lens, turn the camera on, and then tap the shutter button halfway down to start Image Stabilization again. Now, just remove your finger from the shutter button, wait a few seconds for the camera’s meter to turn off automatically (IS simultaneously turns off), and you’ll hear the IS system lock and center the elements with a familiar soft “click” sound within the lens. Now, remove the lens normally and, assuming the lens is otherwise in proper operating condition, you won’t hear the rattle any more!

Avoiding this problem with certain IS lenses is simple: just wait for the IS system to lock and center the elements before you remove a lens from the camera body. Normally, this happens six seconds after you remove your finger from the shutter button (if you haven’t just taken a picture) or two seconds after taking the most recent picture. Turning the camera OFF via its main On-Off switch will also allow the IS system to properly “park” the correction optics.
Will this happen with my IS lens(es)?

Canon has utilized different Image Stabilization mechanisms within the range of IS lenses that have been produced since the first IS lens (the EF 75–300mm f/4–5.6 IS lens, which was introduced in 1995). The majority of Canon IS lenses use the type of IS mechanism described in this article and are susceptible to the correction elements not being properly “parked” if the lens is removed improperly.

Some recent IS lenses use a slightly different mechanism, which in non-technical terms automatically returns the correction elements to a centered position, regardless of how power to the IS system is halted. Thus, lenses like the popular EF-S 18-55mm f/3.5–5.6 IS USM and similar recent lenses don’t go through the same lock-and-center process as IS is deactivated and are not susceptible to having loose correction elements rattle inside a lens.

Of course, there are now third party and independently produced lenses that can be used on Canon EOS cameras, which have optical-type shake-correction as well. We cannot speak to their operation, nor whether they may be susceptible to any specific issues if attachment or removal procedures aren’t precisely followed – consult the instructions of any third-party stabilized lens or contact the manufacturer, if you have questions or concerns.

It’s natural to be concerned if a lens that had been operating perfectly suddenly sounds like something is very loose and rattling around inside the lens. While in theory, a lens with a physical defect can certainly exhibit the same traits, try the procedure described directly above and see if that doesn’t correct the issue before concluding that any Canon-brand Image Stabilized lens is defective. In most cases, it’s not a defect at all, but a natural characteristic of Canon IS lenses that happened to be removed too quickly from the camera.

This happened to me while I was on a photo shoot but I knew what was causing it and fixed the 'problem'. Read this article and get educated on the subject.