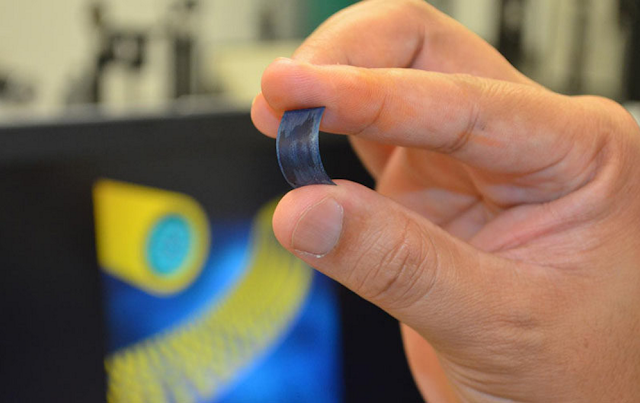 My readers know I am the Wildlife Ho-tographer embarking on wildlife photo tours around the globe. One of the most critical components to any successful trip when one is far away from home or a power source is, ample supply of batteries.

Modern cameras, lenses, cell phones and laptops, all consume a prodigious amount of battery power. It will be great if the batteries we have in our equipment and equipment bag can last
longer. There are simple ways to keep the battery life slightly longer by turning off Image Stabilization, GPS, WiFi and other features, when not needed.

However, a new technology in its early R&D stage may revolutionize the way batteries work in the future. Below is an excerpt from UCF's article :


A team of UCF scientists has developed a new process for creating flexible supercapacitors that can store more energy and be recharged more than 30,000 times without degrading.

The novel method from the University of Central Florida’s NanoScience Technology Center could eventually revolutionize technology as varied as mobile phones and electric vehicles.

“If they were to replace the batteries with these supercapacitors, you could charge your mobile phone in a few seconds and you wouldn’t need to charge it again for over a week,” said Nitin Choudhary, a postdoctoral associate who conducted much of the research published recently in the academic journal ACS Nano.

Anyone with a smartphone knows the problem: After 18 months or so, it holds a charge for less and less time as the battery begins to degrade.

Scientists have been studying the use of nanomaterials to improve supercapacitors that could enhance or even replace batteries in electronic devices. It’s a stubborn problem, because a supercapacitor that held as much energy as a lithium-ion battery would have to be much, much larger.

“There have been problems in the way people incorporate these two-dimensional materials into the existing systems – that’s been a bottleneck in the field. We developed a simple chemical synthesis approach so we can very nicely integrate the existing materials with the two-dimensional materials,” said principal investigator Yeonwoong “Eric” Jung, an assistant professor with joint appointments to the NanoScience Technology Center and the Materials Science & Engineering Department.

Scientists already knew two-dimensional materials held great promise for energy storage applications. But until the UCF-developed process for integrating those materials, there was no way to realize that potential, Jung said.

“For small electronic devices, our materials are surpassing the conventional ones worldwide in terms of energy density, power density and cyclic stability,” Choudhary said.

Cyclic stability defines how many times it can be charged, drained and recharged before beginning to degrade. For example, a lithium-ion battery can be recharged fewer than 1,500 times without significant failure. Recent formulations of supercapacitors with two-dimensional materials can be recharged a few thousand times.

By comparison, the new process created at UCF yields a supercapacitor that doesn’t degrade even after it’s been recharged 30,000 times.

Jung is working with UCF’s Office of Technology Transfer to patent the new process.

Supercapacitors that use the new materials could be used in phones and other electronic gadgets, and electric vehicles that could benefit from sudden bursts of power and speed. And because they’re flexible, it could mean a significant advancement in wearable tech, as well.

“It’s not ready for commercialization,” Jung said. “But this is a proof-of-concept demonstration, and our studies show there are very high impacts for many technologies.”