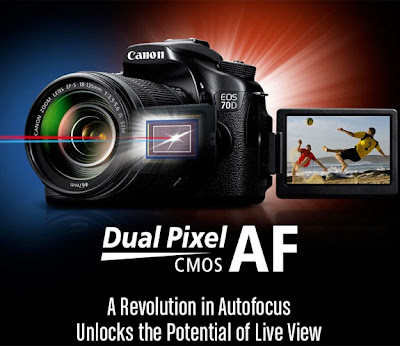 The recently released Canon EOS-70D APS-C camera has gotten off to a good start. Many reviews are favorable and the star of the camera is the Dual Pixel CMOS AF system. The following is an excerpt from DPreview recent comparison between different AF systems :

We set up a few tests to compare conventional, dedicated phase-detect autofocus to sensor-based phase-detect, to better understand the new system's behavior.

In general, we would expect any on-sensor focus method to be more accurate than an SLR's conventional AF system, because it is measuring focus from the plane where the image will be captured. The conventional, dedicated AF sensor sits elsewhere in the camera, behind its own optics and a dual mirror assembly (each aspect of which will always be slightly mis-aligned), which means that it isn't directly measuring focus - it's taking a measurement as a proxy for focus.

However, with most lenses, we expect the difference in focus between the two systems to be quite small. When working with the relatively small apertures offered by kit zooms, the greater depth of field is likely to hide any slight imprecision. But with large aperture lenses, differences are likely to become more noticeable.

The Canon EF 85mm f/1.8 USM is a relatively challenging lens to focus, especially with the aperture wide-open, due to its narrow depth of field and lens aberrations at maximum aperture. However its axial chromatic aberration (green and purple fringing in front of and behind the focus plane) has the advantage of making it easy to assess where the camera has focused.

As we'd expect, the Dual Pixel AF system outperforms the conventional autofocus system - it's more consistent, shot-to-shot and it's more accurate, in terms of where it focuses. Interestingly, it's not quite as accurate as manually focusing the camera by using both live view and the depth-of-field preview button to ensure you're focusing at the aperture you're using to take the photo.

Interestingly, when we subjected the EOS 60D to the same test, we got similar, but slightly different results. The conventional phase-detection AF produced almost identically soft images, but switching to live view autofocus yielded the same results as manual focus - putting its contrast-detect AF method ahead of the 70D's Dual Pixel AF in terms of accuracy. It's perhaps not a surprise that contrast-detect autofocus is more accurate than phase-detect, since it keeps moving the lens until optimal focus is achieved, but it's important to remember that it's quite a bit slower than the 70D's Dual Pixel AF.