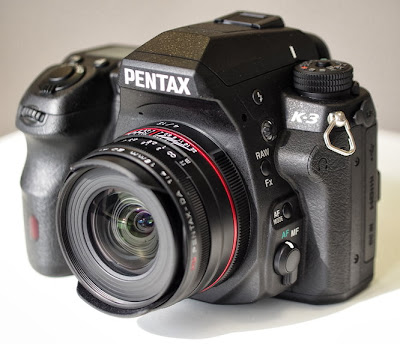 My readers know I have picked the Canon EOS-7D as the best value in APS-C DSLR camera three years in a row. However, the camera's technology is getting a bit long in the tooth and Canon seems to be in a funk lately. They better hurry up and make some meaningful product announcements soon. Manufacturers like Pentax are coming out with cameras that are challenging the aging EOS-7D. The following is an excerpt from DPReview's first impression of the Pentax K-3 camera. Click here to read the whole article.

"Pentax has a long history of being a little different from the 'big two' SLR makers, introducing features that would normally be found on cameras costing quite a bit more, such as weatherproofing and larger, pentaprism optical viewfinders. It's also created some products that seemingly came out of left field, such as the Q7 and K-01 mirrorless cameras.

Ricoh, now owners of the Pentax brand, has continued the tradition of innovation, no better illustrated than with the concept of a digital SLR that has an anti-aliasing effect that can be turned on at the push of a button (Nikon recently patented a concept that accomplishes the same thing, but in a different manner). However, it hasn't accomplished this by having the filter just drop into place. No, Pentax is using its sensor-shift image stabilizer to deliberately move the sensor during the exposure, slightly blurring the image to mimic the effects of an optical low-pass filter. Not only can this be turned on and off, Pentax is also offering two 'intensities' to choose from.

The name of the camera with this breakthrough feature: the Pentax K-3. This camera takes the rugged design of the K-5 II / K-5 IIs that came before it and bumps up the resolution, improves the AF system, speeds up the processor, and enlarges the LCD and viewfinder."