How To Fake A Negative and Photograph Over A Century Ago 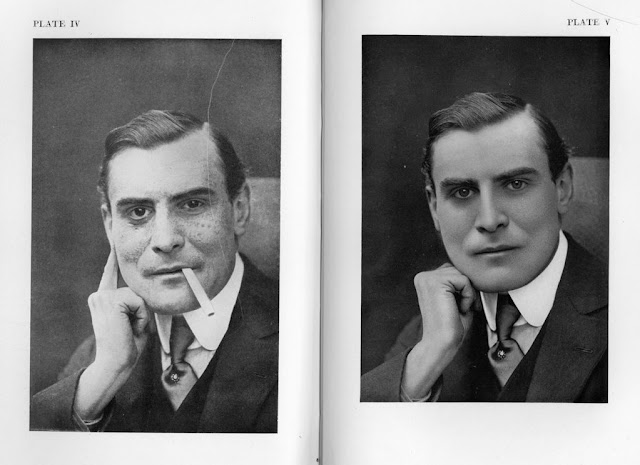 My readers know I have been a wildlife photographer for 25 years using Canon equipment. My first professional film camera was the Canon EOS-1. When Canon announced their first digital camera, the D30 in 2000, I bought it as an experiment and worked with the new medium. When Canon introduced their first 'affordable' full frame EOS-5D camera in 2005, I bought that as well because by that time I have seen the value of digital photography and needed a professional 'backup' camera. You can see my equipment bag and works on MichaelDanielHo.com

Some 'purist' photographers think taking photos with digital cameras and especially editing them with Adobe software afterwards amount to cheating. Well, I have news for them. Over a century ago, back in 1907, a photo retoucher by the name of C.H. Chaudry wrote an article for Camera magazine, titled 'Faking the Negative'. In it, he described the latest techniques in retouching and 'faking' photographs by manipulating the negatives. Below is an excerpt from his article

Faking the Negative by C.H. Chaudry

Faking a negative is distinct from retouching even though the two processes are allied. To retouch a negative is considered to mean the elimination of pinholes, the lightening of shadows, strengthening of highlights, etc., with pencil or other medium, but does not, in the general acceptance of the term, include such alterations as completely change the character of the negative. A skilled retoucher can, it is true, knife out a dress and produce a low necked effect, or cut off a wart and put smooth skin in its place, or amputate a double chin or add an ear which the camera has not put where Nature intended ears to go. But I submit that retouching carried to such a point is faking pure and simple hence this title.

For the average photographer who follows the art in a purely amateur way, faking will be done more upon landscapes and seascapes and other outdoor pictures than upon portraits. It is well that it is so, for first attempts at least, because altering shadows and highlights upon all outdoors is not as dangerous as altering them upon the human face. Turn the shadow from side to side on a tree trunk and it is still a tree, but try it on a face and the likeness may totally disappear. So for the present article at least faking will be considered with reference to outdoor negatives.

The tools you need and the materials with which to work may be as many or as few and simple as you wish. A pot of glue, a piece of grainless onion skin paper and a pencil will do wonders — from this simple outfit one may run the gamut and end with bottles of fluid, ground glass substitute, knives, pencils, stomps, crayon, paints, stains, whatnot!

Let us begin with the glue and the onion skin paper.

Run a small thin edge of glue about the glass of a negative. Dampen the onion skin paper very slightly by placing between damp blottters under pressure for half an hour, then waving in the air until while limp the paper is skin dry. Lay the paper down on a table and drop the glued edge negative upon it. When the onion skin paper dries it will be found to be tightly stretched over the glasss side of the negative.

Now take a print of that negative.

With the print before you, and the negative, paper side out upon some sort of a retouching easel — a sheet of glass supported on books with white paper underneath to reflect the light upward will do if nothing better is at hand — proceed to strengthen such highlights as appear weak in the print. Do this with a very soft pencil — the softer and mushier the better. Draw only lightly with the pencil, so that you get lead on the paper without hard lines. With the tip of the little finger or a wad of cotton twisted about a match stick, smear this lead until all hard lines have disappeared. In this simple fashion weak clouds in a sky can be brightened, reflections in water made stronger and weak shadows outlined with a fleck of light here and there.

Take another print from the negative in its present form and compare. If the highlights are too strong, reduce with a rubber eraser — sponge rubber is best for the purpose. Now it may well be that there are some portions of the negative in which highlights are a bit too strong — these can be darkened by means of a tiny bit of vaseline. Wind cotton about a match, and put the least possible quantity of white vaseline on the cotton. With this, smear over the paper over the too dense highlight. It will make the paper more transparent in that particular place, thus permitting more light to get to that particular highlight, thus making it print darker.

Of course, there are many ways of doing this sort of work besides that mentioned. A very good way is to use a sheet of ground glass, ground side out, and bind it to the negative on the back. Working with pencil or stomp on this is just as easy as on paper, and has the added advantage of removing the faking by the thicknesses of two glasses instead of one from the film. But the same thing is sometimes a disadvantage — it is difficult to get a sharp contrast by faking on the bound on ground glass, for that very reason of there being two glasses between film and pencil marks.

This is a clear solution which dries almost immediately, leaving a milky deposit of fine crystals behind it, which simulates the appearance of ground glass very closely. In practice a pool of this liquid is poured onto a slightly warmed plate, on the glass side, and allowed to spread to the corners, the surplus being returned via the corner to the bottle, very much as if varnishing the surface of the plate, for retouching. The fluid is inflammable, and should not be used near a flame. It should be allowed to set for half an hour at least before use to get bone dry. Ether on a cotten swab will remove it from the fingers or the back of the plate, should it be desired to get it clean again. It can be marked and worked upon much as ground glass, but vaseline does not clarify it as well as it does ground glass itself.

Let us turn from work upon the back of the negative to work upon its face. This comes within the domain of retouching, yet stomp work with fine polishing powder for mechanical reduction and water color work are not usually done by retouchers on landscape negatives. The polishing powder should be the finest obtainable — either in the form of a jeweler’s rouge or in some silver polish in paste form, which is absolutely grainless. Such powders are made by water precipitation of an abrasive, only the finely divided particles which remain in water mixed with the abrasive, being used. The water, turbid with the fine abrasive, is poured off the balance of the abrasion and allowed to evaporate — what is left is the jeweler’s rouge. Mixed with vaseline or other grease, it becomes a polishing paste.

With this and a stomp (paper roll, pointed, obtainable of any artists’ supply house) quite wonderful results can be had in reducing too dense highlights. A small quantity of the paste is worked up on the stomp, and that tool then applied with a circular rubbing motion to the too thick deposit. It does not do to hurry the work — the powder is very fine and cuts slowly but cut it does and with a little patience the most wonderful results can be had in the way of bringing out detail hidden in too dense a deposit of silver and in putting in shadows where they are most wanted.

Another way of doing the same thing, often used in certain portions of drapery is the employment of a fine, clear transparent blue water color paint, which, when laid on properly with the brush, permits more actinic light to pass than through the rest of the negative, tinted either slightly yellow or, in severe cases, a faint pink. How deep a color to be put on is a matter only experience can show. Personally, I find the paint method inferior in my own hands to mechanical reduction, combined with work upon the ground glass substitute side of a negative.

In all this variety of photographic work great care should be had not to make any hard or sharp lines. Photography is not a process of lines — it is one of light and shade only, making out lines only by contrast, and never by the employment of real lines. Hence to put a real line into a negative is to make the resulting print show something that actually is not present. Use the stomp, the rubber, the finger tip freely, and remember that masses of light and shade arc what you want, not sharply contrasting hard edged areas. It is to assist in this particular that the ground glass, bound back to back with the negative, is particularly advised, on account of the diffusion obtained through the separation.

It is sometimes difficult to fake a negative properly, because either the negative itself is very small or the detail which you want to fake is small. In such a case, an enlarged positive on glass can be made by the common enlarging method and the faking done on the positive. In this case, of course, darkening the ground glass means adding to the shadows and not the highlights. But from the original negative a same-size positive can be made by contact and an enlarged negative made from the positive. This, after working up with the stomp or other method, can be made small again, when any roughnesses in the work itself will entirely disappear. I have done some very curious and interesting things in this way, making a positive from a 5×7, an enlarged negative 11 x 14, and working on that, then reducing that again to a 5 x 7 or smaller. Clouds which are rather ragged in appearance possess delicacy of form when made small — highlights and shadow-detail which appear rough in the original size soften down so much in the processes of “ensmalling” if one may call it that, as to quite astonish not only the spectator, but the maker himself.

Of course, it is a trouble — but, then, all dodging and faking is a trouble. If only the work is done carefully enough and with a little preliminary practice on negatives for which you do not much care, the trouble will, in the end, be found to be but a new photographic pleasure.