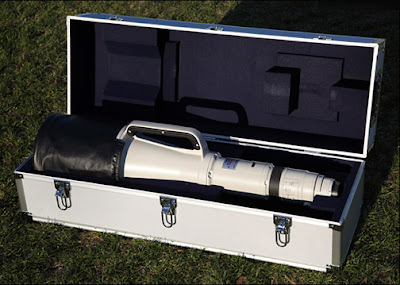 The Canon EF 1200mm f/5.6L USM lens is truly a Super Lens and a legend in its own right. This super rare, full autofocus lens in no longer in production. The predecessor to the Canon EF 1200mm lens was the Canon FD 1200mm f/5.6 L manual focus lens. The lens made its first debut during the 1984 Olympic Games in Los Angeles, California. Chuck Westfall of Canon USA was there and recalls that "5 copies of the original FD 1200mm f/5.6 L lens were brought to L.A. and used for newspaper, magazine and wire service coverage of the Olympic Games."

Chuck Westfall further remembered that "All of the FD mount  EF 1200mm f/5.6L lenses were eventually shipped back to Japan, and at some point in the late 1980s, they were converted to EF mount," resulting in forerunner of the current model - the Canon EF 1200mm f/5.6L USM lens. The new EF 1200mm was officially announced by Canon Inc. in July of 1993 with an annual production volume of around two lenses per run. The EF 1200mm was available by special order, almost entirely hand-made, with lead times running around 18 months. There are no reliable data to indicate how many copies were made. The estimate runs from anywhere between two dozen to less than one hundred lenses and Canon Inc. is not releasing any figures.

Canon Professional Services owns two of these Super Lens. Sports and wildlife magazines, news and government agencies,  photographic collectors are some of the likely owners of this lens. Realistically, most people cannot or will not want to own this lens. For starters, it weighs over 36 pounds and requires two people to set up the lens before it can be used. The current EF 800mm f/5.6L IS USM lens lists for $13,999 and weighs less than 10 pounds.