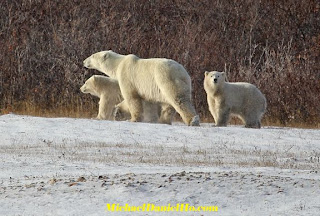 The Polar Bear (Ursus maritimus) is the largest living land carnivore, with adult males growing over 8 feet in length and can stand over 10 feet tall. The most well known of all bears, the polar bear is immediately recognized by its distinctive white color thick fur. The only unfurred parts of the body are the foot pads and the tip of its nose, which are black, revealing the dark color of the skin underneath the pelt. The neck of the polar bear is longer than in other species of bears, and the elongated head has small ears. Polar Bears have large strong limbs and huge forepaws which they use as paddles for swimming. The toes are not webbed, but are excellent for walking on snow as they bear non-retractable claws which dig into the snow like ice-picks. Polar Bears are solitary mammals throughout most of the year, with the exception of breeding pairs and family groups. Their main food source is ringed seals and bearded seals. The polar bears capture seals when they surface to breathe, or hunt them in their lairs, where young seals are hidden and fed. 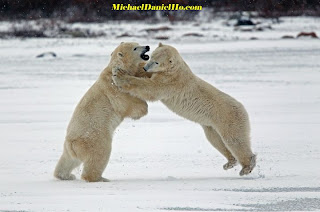 The breeding season for Polar Bears are from late March to late May. Females nurse and care for their cubs for around 2.5 years and are available for mating only after the cubs are independent, about every three years. This means only a third of females can breed each season so there is fierce competition by the males to mate with the females, which may explain why males bears are so large in size. The largest recorded male bear was about 2,200 pounds. Polar Bears are found throughout the circumpolar Arctic on ice-covered waters, from Canada, to Norway, the state of Alaska in the United States, East Siberian, Laptev, and Kara Seas of Russia and Greenland (Denmark). The furthest south the polar bears are found all year round is James Bay in Canada, which is about the same latitude as London, England. 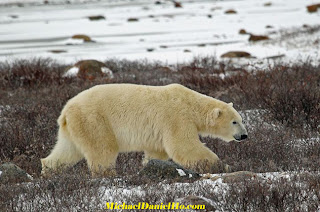 Polar Bears are governed and protected by an international accord reached between the five nations with polar bears - Canada, Norway, US, Russia and Denmark. These nations signed the ‘International Agreement on the Conservation of Polar Bears’, and agreed to prohibit unregulated hunting and to outlaw hunting from aircraft and icebreakers. The agreement also obliged each nation to protect polar bear denning sites and migration routes, as well as undertake and share information on polar bear research. However, the threats caused by climate change and loose hunting regulations are now the main concern, especially as the rate at which environmental changes could occur may be faster than the ability of the Polar Bears to adapt. 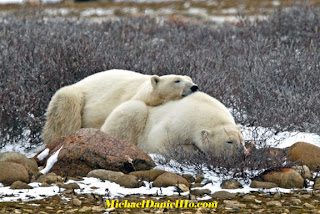 Going on a Polar Bear photo shoot can be an expensive undertaking because of the locations of their habitat. Hudson Bay in Canada and the Svalbard archipelago in the high Arctic are two relatively accessible locations because they have a few commercial tour operators taking photographers there. Temperatures can drop down to below -20 degrees Fahrenheit, depending on time time of year and if the wind is blowing, it will feel much colder. Having the proper clothing and photographic gear is a must for the traveler. The battery in most DSLR cameras will have shortened life cycle due to the extreme cold so having plenty of batteries are highly recommended. Sometimes, blowing wind and snow will also make having a clean lens almost impossible so a lens hood is an essential piece of gear to bring. Exposure compensations will have to be made according to the light and reflection of the snow condition.

I find the Canon EOS-1D X and EOS-1D MK IV bodies perfect for the job. A couple of high quality zoom and prime lens, like the EF 100-400mm f/4.5-5.6L IS II , EF 400mm f/4 DO IS II or EF 200-400mm f/4L Extender 1.4x lens will handle almost all the wildlife action. You can visit my equipment bag to see the gear I used and read the reviews of various equipment and see more polar bear photos on my website.