How To Determine The Age of Your Canon Lens

My readers know I am The Wildlife Ho-tographer using Canon equipment since the 1980s. You can see my equipment bag and works on MichaelDanielHo.com. Prior to July 2010, Canon was using a coding system on their lenses to indicate the age and place of manufacture. However, starting in July of 2010, Canon switched to a 10 digit serial number but the folks at TDP think they have cracked the code. Below are their explanation of Canon's serial numbering system, both post July 2010 and pre July 2010.

Starting in July 2010, Canon began using a 10-digital serial number and ended the inclusion of a separate manufacturing date code. For information on determining the age of a pre-July 2010-manufactured lens, see the section on interpreting the old date code below. For determining the age of a lens bearing the newer 10-digit serial number, please read the following section.

To determine the age Canon lens based on a 10-digit serial number :

The DD is the key to the date of manufacture of the lens - the date code. The long, narrow Canon lens date code chart is shown on the right side of this page.

Future dates are predictions/expectations. Of particular interest is how the numbering system will behave in 2013/03 when the 99 is incremented. Will the DD value roll over to 00? Increment to 100 - becoming DDD?

The third digit in the serial number, C, may be a charge/batch type of number. Canon has been using this number to indicate lenses needing specific service-related updates such as firmware.

Please take note that, while the overall chart is holding out nicely with the lenses we've checked, it is a work-in-process. In part, the numbers might be shifted by a month or so. Please send us any discrepancies you find.

Special thanks go out to Norbert for his role in the development of this chart. 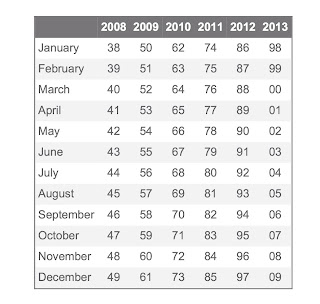 To determine the age of a pre-July 2012 Canon lens bearing a date code :

Beside the rear lens element of many (but not all) pre-July 2012-manufactured Canon lenses is a date code (as seen below) in the form of "UR0902". This code is also present on many other Canon products including camera bodies.

The first letter, "U", indicates that the lens was made in Canon's Utsunomiya, Japan factory. Prior to 1986, this letter is moved to the last position of the date code.

The second letter, "R", is a year code that indicates the year of manufacture. Canon increments this letter each year starting with A in 1986 and prior to that, A in 1960 without the leading factory code. Here is a table to make things simple:

The first two numbers, "09", is the month number the lens was manufactured in. Month 02 is February, month 11 = November. The leading zero of the month code is sometimes omitted.

The next two numbers, "02", are meaningless in determining how old a Canon lens is. This is a Canon internal code (that is occasionally omitted).

You now know the manufacture date for your lens - But - You cannot know how long the lens was in inventory, in shipping transit and on a shelf until it was originally purchased (without having the original receipt or a reputable person accurately informing you).

The Canon lens date code in the sample picture indicates that this Canon EF 24-70mm f/2.8 L Lens (I know the lens model because I took the picture - not from the date code) was made in Utsunomiya, Japan in September 2003.