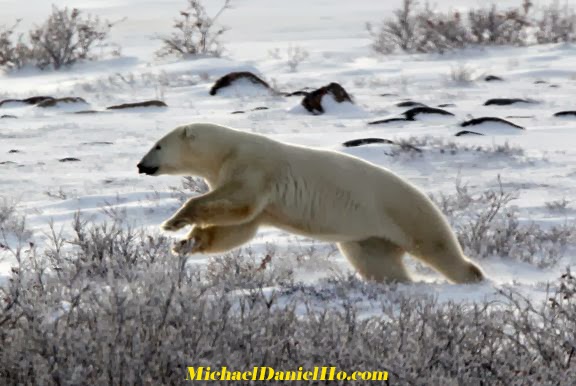 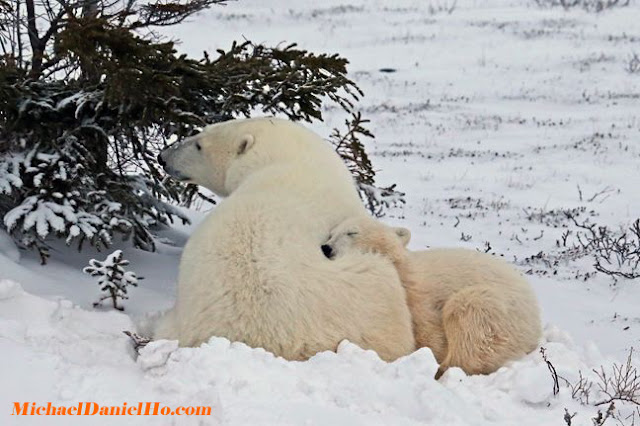 
I am back from my Polar Bear photo shoot in Hudson Bay. The Polar bear is the largest living land carnivore, with adult males growing up to over 8 feet in length and some weighing close to one ton. The largest bear ever recorded weighed in at 2,300 pounds. Females are about half the size of males, although a pregnant female with stored fat can exceed 1,000 pounds in weight. Polar bear cubs weigh about 2 lbs at birth. They look similar in appearance to adults, though they have much thinner fur.

There are five nations where Polar bears are found - United States, Canada, Norway (Svalbard), Denmark (Greenland) and Russia. The furthest south Polar Bears are found year round is James Bay in Canada, which is about the same latitude as London. During the winter, when the ice extends further south, Polar bears move as far south as Newfoundland and into the northern Bering Sea. The US has the fewest Polar Bears and Canada has the most. The best global estimate of their population is about 20,000 to 25,000. They are the most endangered bear species due to the warming of the Arctic region, especially during the summer.

Although their numbers are declining, the US, Canada and Greenland still hunt Polar Bears 'legally' while illegal poaching exists in Russia and Norway. The 'legal' hunting is 'regulated' by quotas given to indigenous people but they can also sell their quotas to big game hunters for $30,000+ per bear. The quotas is almost certain to be exceeded due to the high profit and remote locations of many indigenous towns and enforcement is next to impossible.


The most vulnerable Polar Bear population resides in southern Hudson Bay. The ice has been melting earlier and forming later for quite a few years now. This compresses the Polar Bear feeding season into about 6 months. Without solid ice, the bears cannot hunt seals and they will not be able to survive and rear their young. A breeding female can raise about 7 to 8 cubs to adulthood in her lifetime if conditions are favorable. Human/bear encounters are also on the rise in southern Hudson Bay. This often leads to fatality for the bears and their population is already on a declining rate.

This is one of my more memorable trips to Hudson Bay and I have encountered more mothers with cubs this time. I also came across a seal kill as well. The Polar Bears' condition look alright from my observation but I am not a wildlife biologist. Their fast is ending very soon because the ice is forming rapidly by the bay. Soon they will be able to go on the ice and start feeding but the environment is still under threat and their future is by no means secure. Visit my website to see many more photos from my previous photo shoots.

For more posts on photographing other wildlife, you will find Elephants, Hummingbirds, Bengal tigers, Killer whales and Blue whales adventures here. I have been a wildlife photographer for 25 years using Canon gear. You can read my FAQs on wildlife photography, see my equipment bag and my works on MichaelDanielHo.com. You can also follow my travels on my blog, Twitter, Facebook and Instagram.