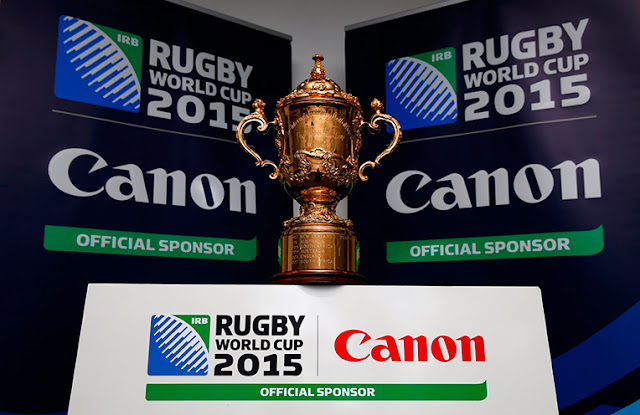 TOKYO, Japan, September 10 - Canon, as an Official Sponsor of Rugby World Cup 2015 in England, will provide support for the event through a range of activities.

At the 2015 Tournament, which will take place from September 18 to October 31, 2015, at 13 stadiums in 11 cities across the U.K., Canon will provide support through its products, technologies and services, as outlined below.

At numerous sporting competitions both in Japan and overseas, Canon provides behind-the-scenes support to members of the press covering these events through its Canon Professional Services program. This on-site support includes expert advice, camera and lens maintenance services, minor repairs and product loans. To further improve media support at Rugby World Cup 2015, Canon will establish on-site camera service centers at 10 of the 13 venues to help ensure that professional photographers can capture the exhilarating action as world-class teams face off for the top spot.
Canon and Rugby World Cup 2015 special website and Digital Image Gallery

Canon will incorporate within the Company’s homepage a dedicated Rugby World Cup 2015 website that provides a range of information, including competition highlights and details regarding Canon initiatives.

Official images, supplied by Getty Images, will be displayed alongside images fans have captured and shared on social networks. Fans will be able to filter images by matches and by teams so that they can quickly access those of most interest to them.

The Digital Image Gallery will showcase 360 degree images from all 48 matches, and gigapixel images from the most important matches, as captured on Canon cameras from within the stadiums. Fans will be able to zoom in and tag themselves in the gigapixel images and can share them with friends via social networks.
Commemorative photo booths at two major Tournament venues

Canon will set up commemorative photo booths at key matches held at the Millennium Stadium in Cardiff and the Twickenham Stadium in London, including the Final.2 Booth visitors will be able to take part in simulated rugby scenarios and the moment will be captured on Canon cameras. Fans can then remember the experience with free souvenir photos printed out on Canon printers.

Behind the scenes at Rugby World Cup 2015, Canon will provide multifunction devices, printers and other products to be used by the Tournament Organising Committee and at each of the Tournament venues, supporting the management of the event by facilitating the printout of handout materials and the streamlining of document workflows. Furthermore, professional photographers at the Tournament will be provided with branded Canon bibs and pitch-side advertising will be visible at all matches.

Rugby World Cup is a Tournament contested every four years by the world’s top national teams. Over the course of the competition, teams from 20 countries and regions vie for Rugby’s top honor. First held in 1987 in New Zealand, Rugby World Cup 2015 will be the eighth time that this action-packed Tournament has been played.

The 2011 competition, hosted by New Zealand, recorded a match attendance of more than 1.5 million and was broadcast in 207 countries and regions worldwide. The 2019 competition will take place in Japan, breaking new ground as the first Rugby World Cup to be held in Asia.