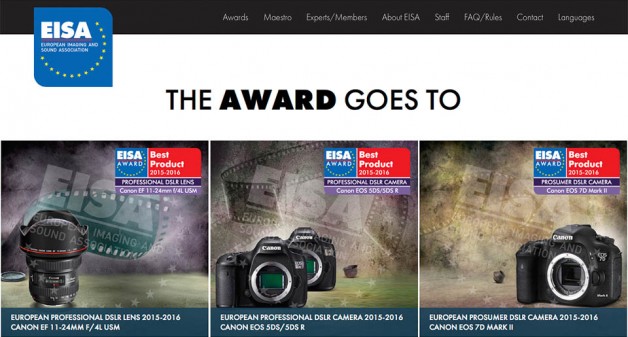 United Kingdom, Republic of Ireland, 15 August 2015 – Canon today announces it has received three prestigious awards from the European Imaging and Sound Association (EISA). The EOS-7D Mark II has been named the ‘European Prosumer DSLR Camera 2015-2016’, both the EOS-5Ds and EOS-5DsR have been honoured with the title of ‘European Professional DSLR Camera 2015-2016’, while the Canon EF 11-24mm f/4L USM has been awarded ‘European Professional DSLR Lens 2015-2016’ – highlighting the outstanding quality of Canon products throughout its DSLR and lens range.

Voted for by panels of editors representing nearly 50 prominent magazines from across 20 European countries, the EISA Awards honour products which combine the most advanced technology, intuitive design and sought-after features, while also providing genuine value to end users. Each of the awarded products has been received with great acclaim since launch, and the EISA award recognition is further testament to their exceptional quality and performance.

“Canon has a warranted reputation for producing high-quality products that our customers really value,” said Steve Marshall, Product Marketing Director, Consumer Imaging Group, Canon Europe. “For us, photography is all about expression and discovery and as a company we consistently strive to produce pioneering, class leading products and technologies that enable people to tell their own stories through quality photography. Each of our awarded products is a fantastic example of our dedication and commitment to pushing boundaries and bringing new capabilities to both professionals and consumers, so we are truly honoured to receive such distinguished awards from the EISA panel.”

The Canon EOS-7D Mark II is one of the best APS-C DSLRs ever made, offering features normally only available in professional full frame models. The 65-point AF system gives fast and responsive focusing in a wide range of conditions, even when tracking fast moving subjects. It can shoot at 10 frames per second, with a huge buffer even when shooting in Raw. The build quality is superb, with full weatherproofing that can cope with almost any conditions. Overall the 7D Mark II is perfect for sports, action and wildlife photographers who like to capture the most fleeting moments.

The Canon EOS-5Ds and EOS-5DsR are the highest resolution full frame DSLRs on the market. The two models give photographers a choice: the EOS-5Ds includes an optical low-pass filter to suppress digital imaging artefacts, while the EOS-5DsR cancels its effect for the sharpest possible images. The 50.6-million-pixel sensor, dual DIGIC 6 processors, reduced mirror vibration and reliable metering deliver superb image quality, while the 61-point AF with 41 cross-type points ensures reliable and fast AF performance. These two cameras are the perfect choice for professional photographers for whom ultimate image quality really matters.

With the EF-11-24mm f/4L USM Canon’s engineers have constructed one of the best wide angle zooms ever made. The world’s widest rectilinear zoom provides class-leading image quality, with exceptional sharpness at all settings even on high resolution sensors. Distortion, chromatic aberration and vignetting are all kept reasonably low. Construction is superb, with weather sealing for outdoor use, and the autofocus is fast and silent. Full-frame users specialising in landscape, architectural or interior photography who demand exceptional optical performance need look no further. It’s bulky and expensive, but for those who can afford it, it’s an absolutely outstanding piece of glass.