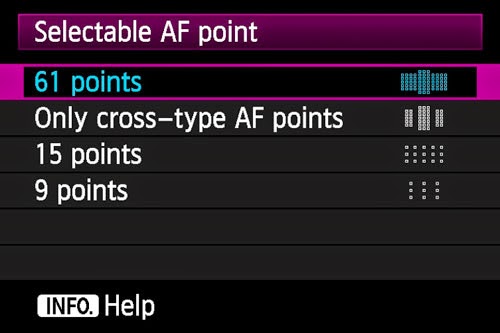 Canon Digital Learning Center has put out a short post on how to switch AF points rapidly on the EOS-5D Mk III. The article is posted below and you can see the original here. I have picked this camera as the best value in full frame DSLR bodies three years in a row. You can read my review of the camera and see photos taken with it on worldwide shoots - MichaelDanielHo.com


Everyone has a method of getting critical focus for a shot. There are no right or wrong ways to do it. If you can get the focus you are looking for, then you are doing it the right way for you.

Canon’s engineers have included a plethora of tools in recent EOS cameras to aid the photographer in getting that perfect focus. They have included great features such as more autofocus points, smaller Spot type focus points, three options for expanding the size of an AF point, and even a joystick to control them. While each AF Area setting has its place in different shooting situations, what if you want to use two interchangeably from shot to shot without slowing down?

In a portrait session situation, you may be shooting both tight and wide shots of one or more people at a time. For more than one person in the frame, I personally like to set the camera to AF Point Expansion in the EOS 5D Mark III — single point plus eight surrounding points or Zone AF, since it is most likely a wider shot. This gives me a fair bit of flexibility to get the focus I need while keeping fast and fluid during a session.

When shooting tight on a single subject, the sharpness in the eyes becomes very important. To ensure that the eyes are sharp, I’ll switch the camera to single-point Spot AF mode and move my AF point to the subject’s eye.

Switching AF Area settings isn’t usually a big deal. The default method is to press the AF point selection button (button to the right of the AE lock or “star icon” button) then press the Multi-function button next to the shutter (M-Fn) until your desired AF Area appears in the viewfinder. While this doesn’t take that long, Canon’s engineers have created a shortcut. As with most buttons on the EOS 5D Mark III body, you are able to reassign buttons to your liking. I made the decision to reassign the depth of field preview button to make it switch the AF Area at my AF point from an expanded setting to single-spot AF. I chose the depth of field preview button because it was easily accessible to press with my ring finger when I’m holding the camera using Rudy Winston’s technique. Actual AF activation can be at the shutter button, or from one of the two “back-buttons” — whichever you prefer.

To change the function of the depth of field preview button, there are two methods that will do the same thing. You can use either the quick menu (press the Q-button, on the rear of the camera), or the Custom Functions menu.

Highlight AF Area selection mode (be sure there’s a check-mark next to it), and using the Multi-controller, highlight the name instead of the check-box. Press SET. Now, select the AF Area you want to use… Spot AF in my example above. Press SET again. (The other functions on this list, such as “Tracking Sensitivity” and so on, impact how the AF system behaves when in AI Servo AF, if you press this same depth-of-field preview button. If you shoot portraits using One-Shot AF, you can leave them un-checked)

If you are wondering what else you can remap, check out the section on the topic starting from page 327 in the EOS 5D Mark III’s instruction manual.

One caution I would have when remapping buttons is that if you hand your camera to a friend, they might have issues operating it if you have remapped a lot of the functions.