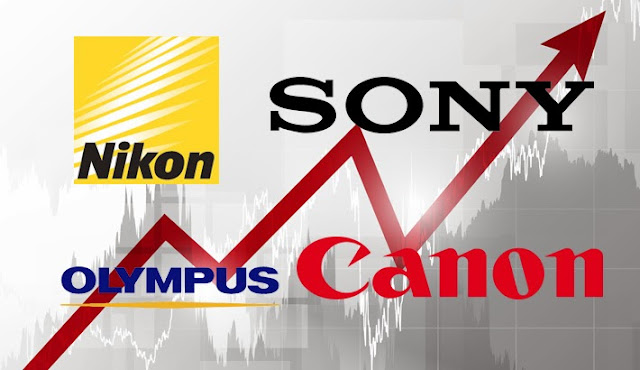 The following article is an excerpt from Reuters wondering whether there is a shakeout coming among the middle tier camera manufacturers in Japan due to the smartphones challenge. My own view is a complete shake out is not likely but there will be inevitable mergers and some names will disappear over time.

I have lamented in my previous posts that, in the last few years, the photography industry seems to be introducing more fluff than genuinely exciting technology, under the disguise of 'innovation.' Most new technologies are evolutionary and genuine innovations do not come that often. The Canon D30 in 2000 (first consumer DSLR camera), the Canon EOS-1D in 2001 (first full frame DSLR camera), and the EF 200-400mm f/4L IS USM Extender 1.4x lens in 2013 (first consumer Super Telephoto zoom with built-in extender) are a few products that come to mind.

The mirrorless camera is a niche product but for those who care more about speed and connectivity in capturing and distributing images, over the composition and quality of photos, will always choose the latest smartphones and their associated apps. Spending a lot of time and money chasing that market seems to bring a diminishing return over time. The best way to survive any shake out is to go back to the core of a company's raison d'etre - sell products with performance, quality and value. The rest will take care of itself.

I have been a Travel and Wildlife photographer using Canon equipment for 25 years. You can read my observations on Canon and the photography industry and visit my website MichaelDanielHo.com to see my works.

Article from Reuters in Tokyo :

Panasonic Corp and Japan's other mid-tier camera makers have a battle on their hands to win over a smartphone "selfie" generation to mirrorless cameras that held such promise when they were launched around five years ago.

Panasonic, like peers Fujifilm Holdings and Olympus Corp, has been losing money on its cameras since mobile phones that take high-quality photos ate into the compact camera business. This year, compact camera sales are likely to fall more than 40 percent to fewer than 59 million, according to industry researcher IDC.

A 40 percent drop in Panasonic's overall camera sales in April-September left the imaging division vulnerable as the company's mid-term plan to March 2016 demands unprofitable businesses turn themselves around or face the axe.

Panasonic held 3.1 percent of the camera market in July-September, down from 3.8 percent a year earlier, according to IDC. Canon Inc, Nikon Corp and Sony Corp controlled over 60 percent between them.

"Only those who have a strong brand and are competitive on price will last - and only Canon, Nikon and Sony fulfil that criteria," added Yoshida.

Canon and Nikon dominate the SLR camera market, while Sony could survive any shakeout thanks to its strength in making sensors for a number of camera manufacturers as well as collaboration with its smartphone division.

Panasonic, Fujifilm and Olympus are trying to fend off the smartphone threat by cutting compacts, targeting niche markets such as deep-sea diving, and launching the higher-margin mirrorless models.

The mirrorless format promised mid-tier makers an area of growth as the dominance of Canon and Nikon all but shut them out of SLRs, where Sony is a distant third. Neither Panasonic nor Fujifilm makes SLRs, and Olympus stopped developing them this year.

Mirrorless cameras such as Panasonic's Lumix GM eliminate the internal mirrors that optical viewfinders depend on, so users compose images via electronic viewfinders or liquid crystal displays. This allows the camera to be smaller than an SLR, while offering better quality than compacts or smartphones due to larger sensors and interchangeable lenses.

"SLRs are heavy and noisy, whereas mirrorless are small and quiet. While some people say SLRs still have better image quality, mirrorless (cameras) have improved to the point where they're equivalent, if not superior," said Hiroshi Tanaka, director of Fujifilm's optical division.

Critics grumble that LCD screens can never compete with the clarity of an optical viewfinder, and that picture-taking speeds are too slow for fast-action subjects such as sports.

Nevertheless, the mirrorless format has been a hit in Japan since Panasonic launched the first domestically produced model in 2008, the G1. They made up 36 percent of Japan's interchangeable lens camera shipments in January-October, according to researcher CIPA.

But the format is yet to catch on in the United States and Europe, where shipments made up just 10.5 percent and 11.2 percent of all interchangeable camera shipments, respectively, and where consumers tend to equate image quality with size and heft.

Sales, which globally are less than a quarter of those of SLRs, fell by a fifth in the three weeks to December 14 in the United States, which included the busy 'Black Friday' shopping week, while SLR sales rose 1 percent, according to NPD, another industry researcher.

"I would focus on the detachable lens market proper, excluding mirrorless, and focus on connectivity," said Ben Arnold, director of imaging analysis at NPD. "How do you bridge that gap between high photo-capture quality and high-quality camera devices and the cloud where every amateur photographer's images live?"