DxO Labs has recently tested the new Sigma 24-105mm f/4 lens and found it to be one of the sharpest around. I like the 24-105mm lens because it offers an ideal focal lengths for travel photography. I have owned the Canon EF 24-105mm f/4L IS for years and am very happy with it. You can see Travel and Wildlife photos taken with the lens worldwide on my website MichaelDanielHo.com

Below is an excerpt and charts from the DxOMark conclusion :

Introduced late 2005, the Canon EF24-105mm f4L IS USM was intended as the final lens in the maker’s range of smaller, lighter more accessible priced f4 zoom variants, and was a rightly popular model. More recently, Canon added a compact EF24-70mm f4L IS USM model to the series but the extra range together with the constant maximum aperture of the 24-105mm is very appealing, not only for stills but also for filmmakers.

Mindful of this potential market, independent lens maker Sigma has introduced a similarly specified constant aperture 24-105mm model complete with  four-stop stabilization (as opposed to the older three stop tech of the Canon) and a ultrasonic type AF motor.

The optical construction consists of a total of 19 elements in 14 groups, with three aspherical elements and a further four elements made from low dispersion glass to minimize chromatic aberrations, field curvature and distortion. Although the Sigma has the same 45cm (17.7-inch) minimum focus distance as the Canon it is slightly larger with a 82mm filter thread and weighs around 30 percent more at 885g (31.2 oz). Compatibility with the firm’s new optional USB dock offers user adjustments and firmware upgrades, adding further value to the already sensitively priced $899 ticket." 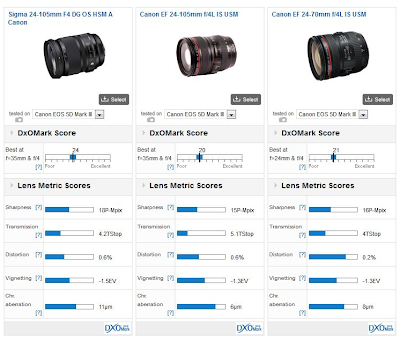 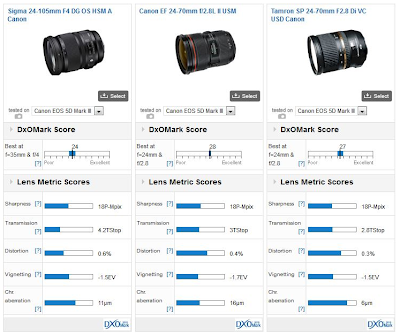