Orca, also known as the Killer Whale, is the largest member of the dolphin family and is a favorite animal for whale watching groups all around the world. Both the male and female Killer Whales have a broad, rounded head and snout, an enlarged forehead, large, paddle-shaped pectoral fins and a large dorsal fin. However, males grow larger than females, and on reaching maturity become stockier and develop disproportionately larger fins, with adult males easily recognized by the tall, erect dorsal fin, which is the largest of any cetacean, growing to an impressive 6 feet in height. The female Orca, by contrast, has a more backward-curving dorsal fin , which grows to about 3 feet in height. An Orca’s dorsal fin and saddle patch are unique to each individual. 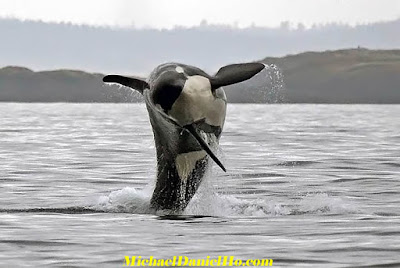 A number of different forms of Killer Whale have been identified, which specialize in different types of prey, differ in appearance, behavior and habitat use, do not associate with each other and are not known to interbreed. Studies have also revealed genetic differences between the different forms, and the Orca may therefore be split into a number of different subspecies or even distinct species in the near future.

One of the best places to see Killer Whales is in Alaska. The cold, nutrient rich water supports a healthy ecosystem, which in turn supports a healthy fish population. The abundance of food attracts plenty of seals, sea otters, dolphins and whales. In turn, Orcas, the Apex Predator of the oceans are found quite frequently in large pods in Alaskan waters.  One of the best spots to photograph Killer Whales is Resurrection Bay.  A couple of years ago, I spent a few days on a small boat out in the Bay and took some great shots of these amazing animals after coming across a few large pods.

The photo at the top is one of my favorite Killer Whale shots. The weather was rather poor, with light rain and very cloudy skies.  The whales were scattered and it was hard to concentrate on any particular individual.  Suddenly, I saw these three females in the distance swimming in unison. I was using the Canon  EOS-1D Mk IV camera with the EF 400mm f/4 DO lens. It was just the right combo and I fired off a quick burst, just in the nick of time.  This "Fearsome Threesome" broke up right after I took this shot.  I consider myself very lucky to have photographed this image.

The best equipment for wildlife photography in my opinion are the Canon EOS-1D X camera and the EF 200-400mm f/4L IS USM Extender 1.4X  or EF 400mm f/4 DO IS II lens combination. I have taken them all over the world on photo shoots and they performed flawlessly. Read the article on my website on where to go whale watching and tips on whale photography. You can see what's in my equipment bag when I go on wildlife photography shoots.

For more posts on photographing other wildlife, you will find Elephants, Polar bears, Bengal tigers, Hummingbirds and Blue whales adventures here. I have been a wildlife photographer for 25 years using Canon gear. You can read my FAQs and see my works on MichaelDanielHo.com. You can also follow my travels on this blog, Twitter , Facebook and Instagram.

Fantastic Orca shots. Love the great whale photos on your website. Thanks for the photography tips as well.

Thanks Tim. Have you seen the movie/documentary 'Blackfish?'
It is about Seaworld and their captive Orcas' training and breeding practices. I recommend anyone with an interest in cetaceans and wildlife to view this film.