The wild Tiger is an iconic symbol of conservation. It is a heavily muscled, powerful predator that stalks and ambushes large prey, camouflaged by its stripy coat. Unlike other cats, Tigers are good swimmers and often cool off in lakes and streams during the heat of the day.  Nine different subspecies of this carnivore are recognized, three of which became extinct in the latter part of the 20th century : the Bali , Javan and Caspian Tigers. The remaining subspecies are the Siberian, South China, Sumatran, Indochinese, Malayan and Bengal Tigers. Their characteristic dark, vertical stripes patterning the body vary in their width, spacing, and length, and whether they are single or double stripes. The pattern and distribution of the stripes is unique to each Tiger. Poaching and habitat loss have occurred throughout much of the Tiger's range and is now severely threatening its survival; as land becomes rapidly developed to meet the increasing demands of the Asian population, Tiger populations become isolated in remaining fragments of wilderness and will ultimately die out.

India is one of the most interesting and last remaining countries to view and photograph Tigers. It is a land of controlled chaos, teaming with sights and sounds, plus a profusion of cultures and races.  The country is also rich in other wildlife, with hundreds of species of birds, plus Leopards, Asiatic Lions, Rhinos, Elephants, Bears, Gaurs and Wild Dogs, just to name a few. Visiting India is quite an exhausting flight for those who live in North America. It takes about 2 days, including layover to get there by plane. From Western Europe, it is about an 8 hour flight. Careful planning is required in order to get the most out of this long journey. 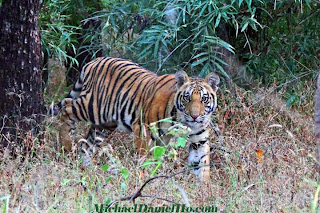 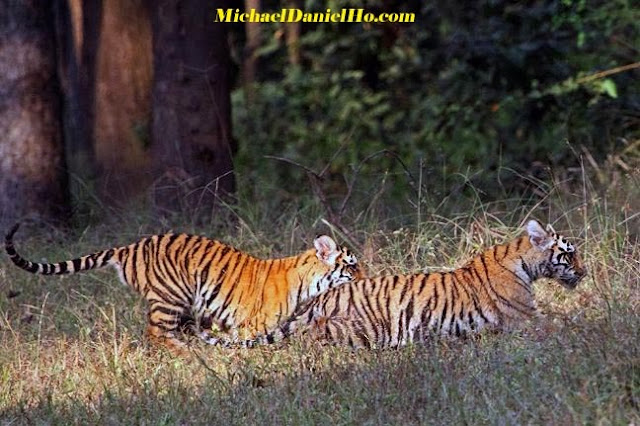 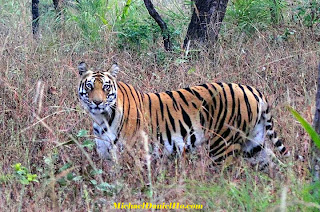 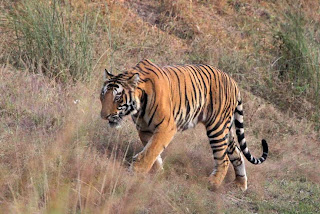 No one is permitted to wander off on foot inside the parks and the Jeeps are small so a tripod or monopod is of little use. The vegetation is thick and the Tigers are experts in concealment. They can be almost 'invisible' in the thick jungle, just a few feet from you. I generally prefer to use a zoom lens since there is no telling where they may pop up but the best combo is to have two cameras ready. I use the Canon EOS-7D with the EF 400mm f/4 DO lens, the EOS-1D X and the EOS-1D Mk IV with the EF 200-400mm f/4L IS USM Extender 1.4x, EF 100-400mm f4.5-5.6L IS or the EF 70-300mm f/4-5.6L IS lens. Visit the Equipment  page on my website to see these gear. Since the lighting is usually fair to poor, I set the apertures of the lenses wide open with ISO setting of 800 and going all the way to 3,200 if required.

It is truly a rare privilege for any photographer to come face to face with a Bengal Tiger in the wild. I came across this one year old cub and we exchanged eye contact for a little while before he disappeared into the bush. It was a very memorable moment for me and I will cherish it for a very long time. Visit the Tiger  page on my website to see more exciting photos from India.

For more posts on photographing other wildlife, you will find Elephants, Polar bears, Hummingbirds, Killer whales and Blue whales adventures here. I have been The Wildlife Ho-tographer for 25 years using Canon gear. You can read my FAQs on wildlife photography, see my equipment bag and my works on MichaelDanielHo.com. You can also follow my travels on my blog, Twitter, Facebook and Instagram.

This is one destination on my bucket list. India is so enchanting and mysterious. The tiger photos are just stunning.

Hi Jim. Yes, tiger photography can be addictive. I am off to India again soon so subscribe to my Blog and keep up with the latest adventure stories and photos.

Going to India on a Tiger safari is definitely on my bucket list. You have some amazing shots here. Thanks for the info and wonderful adventure.