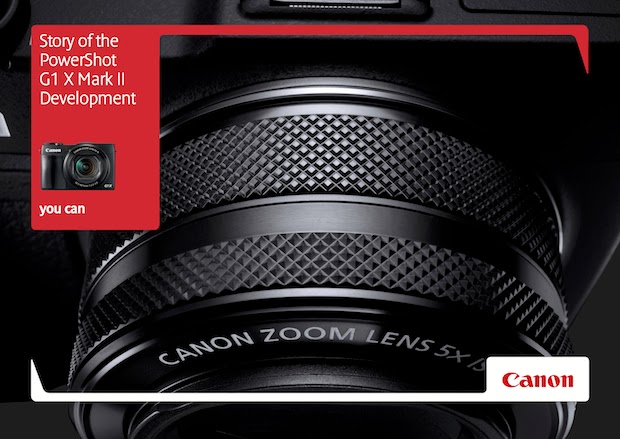 Canon is hoping 2014 will be the year they come out of the funk and go back to its roots. Their stock price has dropped over 5% this year, adding to last year's lackluster result even as the benchmark Nikki average rallied over 50% last year, due mostly to the weak Yen. Today, Canon announced a multi-billion Yen stock buyback program.

With their recently introduced PowerShot G1 X II camera, Canon released a detailed design brochure and appeared to have ruled out any retro-styled cameras. It emphasized features and functionalities, and will not follow the recent 'trend' of retro design movement from other camera manufacturers.

The brochure is revealing and full of interesting information. It revealed Canon went to great length and experimented with many prototypes before coming out with the final design of the PowerShot G1X II. The new camera has twice the focusing speed and a minimum focusing distance of only 5cm, compared to 20cm on the previous model.

Below is an excerpt from the brochure :

"Currently there is a trend towards designing premium compact cameras like classic cameras. However, Canon has kept its distance from this trend. As a result, the design is not pretentious, and it also does not look like a so-called compact camera, and achieves a great balance between traditional and new."

I have been a Travel and Wildlife photographer using Canon equipment for 25 years. Over the decades, I have been a keen observer of the company and made some comments and suggestions on this venerable company last year. You can see my works on MichaelDanielHo.com