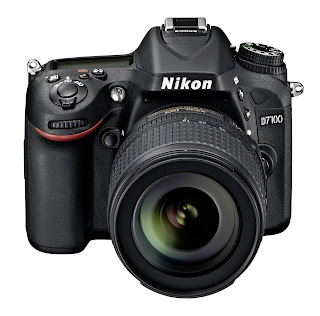 View the latest post of the EOS-7D Mk II here.

Nikon announced their D7100 camera a few weeks ago and now it is in stock at some of the larger camera stores. A mid range, cropped frame camera for 'advanced enthusiasts' and is the flagship of their DX format DSLR lineup. The list price is $1,200 for the body and $1,600 when bundled with a 18-105mm f/3.5-5.6 kit lens.

On paper, this looks like an impressive camera and a very good value. Now we are waiting for Canon's answer to the Nikon D7100 and announce its EOS-70D, perhaps next week during a product event they have been sending invitations out to dealers and the press to attend.

Please read my earlier post on the Canon EOS-70D.  We may have some more rumors soon. My guess is Canon may equip the upcoming 70D with the following features :