I was planning to be in the jungles of India the next few weeks on a wildlife photo shoot, following in the footsteps of Rudyard Kipling's Jungle Book stories. Unfortunately, my sciatica has taken a turn for the worse after my return from the Maui photo shoot a couple of weeks ago so I have decided to cancel the Indian trip. The risk of any further injury from the long airplane and bumpy Jeep rides in the jungles is too great for me.

My Indian trip was to bring me to four national parks, two of them are close to the foothills of the Himalayan mountains and the other two are in Central India. The wildlife I hope to photograph in addition to the Bengal Tigers are Leopards, Indian Rhinos and Elephants, plus numerous other animals and bird species. India is one of the most interesting and last remaining countries to view and photograph Tigers. It is a land of controlled chaos, teaming with sights and sounds, plus a profusion of cultures and races. The country is also rich in history and tradition and I have fond memories of my last trip there.

I have to get over my sciatica soon because there are a few overseas photo shoots coming up for me in the summer. As soon as I get better, I will rebook my Indian tiger safari trip for a later date.

The Tiger is an iconic symbol of conservation. It is a heavily muscled, powerful predator that stalks and ambushes large prey, camouflaged by its stripy coat. Unlike other cats, Tigers are good swimmers and often cool off in lakes and streams during the heat of the day.  Nine different subspecies of this carnivore are recognized, three of which became extinct in the latter part of the 20th century : the Bali , Javan and Caspian Tigers. The remaining subspecies are the Siberian, South China, Sumatran, Indochinese, Malayan and Bengal Tigers. Their characteristic dark, vertical stripes patterning the body vary in their width, spacing, and length, and whether they are single or double stripes. The pattern and distribution of the stripes is unique to each Tiger. Poaching and habitat loss have occurred throughout much of the Tiger's range and is now severely threatening its survival; as land becomes rapidly developed to meet the increasing demands of the Asian population, Tiger populations become isolated in remaining fragments of wilderness and will ultimately die out. 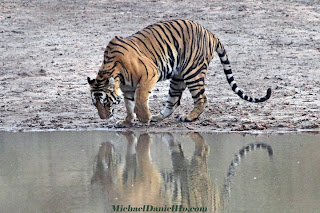 The national parks in India are opened from November to June, although the best months to visit are between November to April. The temperatures in the earlier months are a bit more comfortable but to maximize sightings, March and April are the best, due to the very warm weather but May and June may be too hot for most visitors. Deer and other prey animals are forced to visit waterholes more often during the hotter months and this offers plenty of ambush opportunities for Tigers and photographers like myself.

It is truly a rare privilege for any photographer to come face to face with a Bengal Tiger in the wild. I came across this one year old cub on my last visit and we exchanged eye contact for a little while before he disappeared into the bush. It was a very memorable moment for me and I will cherish it for a very long time. You can visit my Tiger page on my website to see many exciting wildlife photos from India.