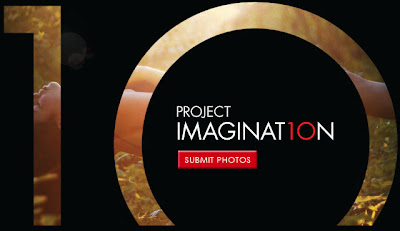 MELVILLE, N.Y., April 24, 2013 – Canon U.S.A., Inc., a leader in digital imaging solutions, announced today the "Project Imaginat10n" Film Contest, which will provide the public with a unique opportunity to showcase their creativity and storytelling abilities by taking a seat in the director's chair.

Helmed by Ron Howard and Bryce Dallas Howard, filmmakers of all skill levels will each have the chance to embark on the same creative exercise as five celebrity directors - Eva Longoria (film and TV actress), Jamie Foxx (Academy Award(r) winner), Biz Stone (co-founder of Twitter), Georgina Chapman (designer and co-founder of Marchesa) and James Murphy (founder of LCD SOUNDSYSTEM) - all of whom are directing short films inspired from ten Project Imaginat10n winning photographs.

Selecting from the same pool of 91 winning photos, the challenge is to create a short film inspired by ten crowdsourced photos and based on ten storytelling themes: Character, Mood, Goal, Backstory, Setting, Obstacle, Relationship, The Unknown, Time and Discovery. The Discovery photo will be the same in each film, "Discovering limits," as selected by Ron Howard as a thematic tie. All 91 photos can be seen at imagination.usa.canon.com.

In 2011, Bryce Dallas Howard took part in a similar creative endeavor, "Project Imagin8ion," where she was mentored by her father, Ron Howard, to create a short film inspired by photographs. After selecting eight winning photos, Bryce directed "when you find me," an award-winning film about two sisters whose childhood bond is tested by a tragedy they are too young to understand.

As the first "graduating" director of the Project Imagin8ion experiment, Bryce will utilize her experience from "when you find me," to act as a mentor for other filmmakers - speaking at select film schools and revealing her tips in an online webisode series, "Bryce's Project Imaginat10n Film Contest Tutorial."

"Directing 'when you find me' was one of the most creatively rewarding endeavors of my career. In addition to the amazing experience of being mentored by my dad, the chance to collaborate with such a vast community of artists and photographers was game changing and challenged the very paradigm of the filmmaking I had grown accustomed to," said Bryce Dallas Howard. "My hope for the Project Imaginat10n film contest is that aspiring filmmakers will feel empowered to showcase their work and explore their own creativity. I'm thrilled to have this opportunity to engage with the filmmakers and support them as they embark on this powerful odyssey into creativity and collaboration."

Submissions will begin on June 4, 2013 at Imagination.usa.canon.com (see Official Rules for details). A panel of judges will select twenty finalist films based on overall technical quality, originality, use of imagination and impression. Bryce Dallas Howard and Ron Howard will then select the final five winning films and package them with the five celebrity-directed films as "A Ron Howard Presentation." All ten films will be showcased at Canon's Project Imaginat10n Film Festival in the Autumn of 2013.