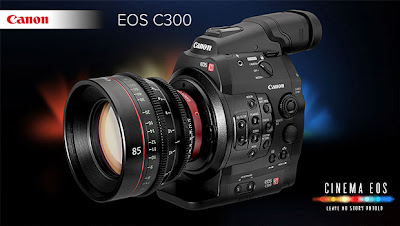 In response to strong demand from professionals working in the fields of motion picture, commercial and television production, the firmware and application software upgrades will offer enhanced color management efficiency and camera functionality, contributing to improved video production workflow efficiency.

A new firmware upgrade for the Cinema EOS C300 Digital Camera adds Push Auto Iris and One-Shot Autofocus (AF), two outstanding automatic functions incorporated in the Cinema EOS C100 Digital Camera (released in November 2012). These functions enable users to automatically adjust lens aperture and focusing through a simple one-touch operation, which can be particularly useful for cinematographers and videographers shooting without the support of an assistant.

In addition, a firmware upgrade for the Cinema EOS C300 and Cinema EOS C300 PL Digital Cameras adds a 1,440 x 1,080 pixel recording mode at 35Mbps, a resolution widely used in terrestrial digital television broadcasting. This new mode will expand the versatility of the XF codec and can be a useful addition for broadcast applications where the reduced bandwidth requires less transmission time while still maintaining a high level of image quality.

Firmware upgrades for the EOS C500 and EOS C500 PL, EOS C300, EOS C300 PL, and EOS C100 Digital Camera models enable the Magnified Focus Assist function’s magnified view area within the viewfinder and LCD monitor to be shifted to locations other than the center of the screen, allowing users to confirm focus across the entire display area.

Professionals in the cinema, television and other high-quality digital production industries commonly make use of multiple cameras when shooting video. As these cameras employ different sensors, each offers varying color characteristics. In addition, users can select from a diverse range of camera settings during image capture, such as aperture, focus position, frame rate and recording format, and because of this, images shot for a single scene can produce different results in terms of color and gradation, depending on the camera used.

Furthermore, when inputting, editing and outputting video, professionals may use various displays, each with its own color space, resulting in differences in how colors appear depending on the device used, even when viewing the same footage. For example, the viewfinder of a camera used during filming, the PC display used to edit the images, and the projector or television for viewing the video each offer varying color characteristics, causing the colors in the video to appear differently.

Therefore, color management takes a great deal of time and effort to correct for camera- and display monitor-related color differences.

ACES is a color management architecture developed by AMPAS, and standardized by SMPTE, that aims to improve efficiency among complex color management workflows by delivering uniform color expression through a standardized color space used during the video production workflow. Through compatibility with ACES, video captured using different cameras and settings can be aligned with the ACES color space, which offers a wide color range and high dynamic range. ACES provides an archive-ready file format, and also delivers high workflow efficiency by allowing users to confirm images with the same appearance even when using display devices with varying color characteristics during input and output.