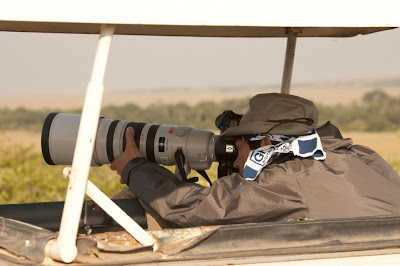 Canon announced the development of the EF 200-400mm f/4L IS 1.4X super telephoto lens over two years ago. Since then, this lens has been around the world on many field tests and spotted on all continents, perhaps except Antarctica.

All the basic features about the lens have been well known. It has a built-in 1.4X extender and can be turned on with just a flip of a switch. On the left side of the lens, one finds the switch panels. The stabilization button is the same as the current Series II super telephoto lens : the classic mode 1, mode 2 for panning and the new mode 3 that works only during the exposure. The minimum focusing distance is about 6 feet and the image stabilizer is very effective, relatively sharp photos can be obtained even with 1/40 to 1/60 of a second shots.

The lens also accepts external extenders. Mounting the Canon EF 2.0X will give you the equivalent of a EF 400-800mm lens. Although not completely finalized, the dimensions of the lens are similar to the current EF 500mm f/4L IS II, approximately 5.7 x 15.1 inches but the weight is expected to be slightly heavier, perhaps weighing around 8 pounds.

Canon will not permit any photos taken with the test versions of the EF 200-400mm f/4L IS 1.4X lens to be published but there is no reason to believe it will not deliver stunning images, just like the current Series II lens. All the previews of the lens are positive. You can see a video and hands-on preview of the lens in my earlier post here.

So the burning question is, 'When will this lens be officially released for sale?' I am hoping it will be some time in the latter half of 2013 but of course it can slip into 2014. Canon should issue some progress report on this lens. The saga continues on the most tested, spotted but still unavailable lens in history. The world is waiting impatiently.