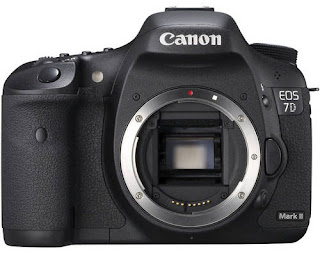 As the announcement of the Canon EOS-70D and EOS-7D approaches, more rumors are coming out. My own personal opinion is the EOS-70D will probably share the same sensor as the recently introduced Rebel SL1 camera but the EOS-7D Mk II will have a brand new sensor, probably around 21 MP. You can read my latest post on the upcoming EOS-70D camera here.

The Canon EOS-70D and EOS-7D Mk II prototype cameras were apparently spotted out in the field. The following is my expectation of the specifications of the EOS-7D Mk II :

If it turns out to be mostly accurate, it is not far from my earlier post on the upcoming EOS-7D Mk II specs. I hope the camera will come with 2 memory card slots and the GPS and WiFi will not be part of the features, especially in light of the vulnerability of WiFi enabled cameras. See my post on this subject. It is not unusual for Canon to have different prototype models for field testing. More rumors and information should leak out as the launch date for the much anticipated replacement to the EOS-7D camera approaches.